Cut off from their audience by coronavirus, artists in a country famous for music are taking to social media to perform

The Brazilian guitarist Cainã Cavalcante was gearing up for tours of Cuba, Colombia and the United States when coronavirus struck.

Now, like thousands of musicians in the land of samba and bossa nova, he is in lockdown – trapped at home with six instruments, an empty gig schedule and a burning desire to resist the global health crisis with his strings.

The Brazilian guitarist Cainã Cavalcante was gearing up for tours of Cuba, Colombia and the United States when coronavirus struck.

Now, like thousands of musicians in the land of samba and bossa nova, he is in lockdown – trapped at home with six instruments, an empty gig schedule and a burning desire to resist the global health crisis with his strings.

“It’s a moment to reinvent yourself, reorganize and find creative ways to cope with a situation that’s truly beyond our control,” said the 29-year-old virtuoso who has hardly stepped outside since his last concert was cancelled on 13 March because of a government ban on shows.

Cavalcante remembers feeling dazed by the Covid-19 closure of concert halls and theatres, which was quickly followed by a statewide shutdown in São Paulo where he lives.

“It was a blow. I remember thinking: ‘What are we going to do now?’ But I always try my best to be a resilient person. I don’t like to get bogged down in my problems,” he said.

With stages off-limits, Cavalcante has taken his art online using Facebook and Instagram to broadcast “Quarentena Sessions” (Quarantine Sessions) from his flat – split-screen jams with musicians in a similar state of confinement.

“Everyone taking part is genuinely in quarantine. Everyone’s in their own little corner waiting for all this to pass,” said Cavalcante, who mixes the recordings at his home studio.

The sessions started on 25 March – four days after São Paulo’s 44 million residents were ordered indoors – with a duet with the saxophonist Josué Lopez.

The following week Cavalcante hosted Mestrinho, a Grammy-winning accordion player from the north-eastern state of Sergipe.

The singer Vanessa Moreno joined from Ourinhos, a town in the rural interior of São Paulo state where she is sheltering from the coronavirus with her two-year-old daughter.

“We’ll be here indefinitely,” said the 33-year-old singer who hopes to offer fans “a little seed of happiness and hope” with her quarantine sounds. 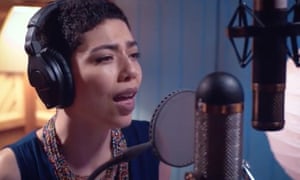 Other musicians have contributed from abroad, including the Israeli guitarist Yotam Silberstein who is holed up in Brooklyn after coronavirus scuppered a show at the Lincoln Center and a tour of Europe.

“I’m a Brazilian at heart,” said Silberstein, a South American music fan since hearing Hebrew covers of Chico Buarque and Tom Jobim during his childhood in Tel Aviv.

Silberstein – who is hosting his own Covid-era sessions called the Quarantine Duos - said music was the perfect companion at a time of forced separation. “Music is really a source of sanity.”

But that optimism masks a bleak outlook for composers and performers.

In Brazil, concert halls and clubs are closed until further notice, with the entertainment industry expected to shed tens of thousands of jobs. In a report on the slump, the Folha de São Paulo said the live music scene faced unprecedented crisis.

“There’s never been an interruption like this … only during wars,” Pedro Augusto Guimarães, the president of one industry association, told the newspaper. “It’s like when a show ends and the curtains close.”

Moreno said the atmosphere among musicians was tense. “We just don’t know what direction things will take after all this.”

“There is a very dark side to this whole story,” Cavalcante admitted. “We will probably be the last to get back to work because big crowds won’t be allowed.”

Some of Brazil’s finest instrumentalists and singers have been using social media to stream their songs from shutdown.

“Some are doing live broadcasts … others video performances. There’s a huge range,” said Liz Rosa, a New York-based singer who has also taken her work online after coronavirus obliterated her show schedule in Greenwich Village and forced her back Brazil.

Rosa said musicians had yet to figure out how to survive off such recordings. “We’ve got bills to pay, just like everyone else,” she joked, urging fans to cough up to keep their favourite artists afloat.

But for now the sessions offered an alternative platform.

“I feel a gigantic sense of loss,” said Rosa, 33. “It’s not just about the work and the money. It’s that there’s no longer a stage.”

“I grew up on stage … My whole life is about the stage and the experience I have with the audience: the looks that are exchanged, the applause, feeling what other people are feeling,” she said.

“Unfortunately, we’re going to go a little while without this.”