'Are you a spoiler?': why critics fear Amash's Libertarian bid may ensure a Trump win

“He has no idea what’s gonna hit him as a third-party challenger,” says Ralph Nader, who knows better than most after running for US president four times. “The public has bought into ‘the spoiler’. The public wants to vote for a winner.”

Nader is considering the prospects of Justin Amash, a congressman from Michigan who announced this week he is seeking the Libertarian nomination for the White House. Amash reasoned that millions of Americans do not feel well represented by either major party or their candidates: Republican Donald Trump and presumptive Democratic nominee Joe Biden.

“He has no idea what’s gonna hit him as a third-party challenger,” says Ralph Nader, who knows better than most after running for US president four times. “The public has bought into ‘the spoiler’. The public wants to vote for a winner.”

Nader is considering the prospects of Justin Amash, a congressman from Michigan who announced this week he is seeking the Libertarian nomination for the White House. Amash reasoned that millions of Americans do not feel well represented by either major party or their candidates: Republican Donald Trump and presumptive Democratic nominee Joe Biden.

The 40-year-old, who quit the Republican party to become an independent and voted for Trump’s impeachment, told the Associated Press: “It’s important that we present them with that alternative … The first step to moving toward no political parties or all independent candidates is to provide some big challengers to the main two parties right now.”

It is not controversial to assert that Amash has no chance of winning. But it is also notable that in 2016 in Amash’s home state, Michigan, Trump took a key electoral college win over Hillary Clinton by 10,704 votes, or less than a quarter of a percentage point. Gary Johnson, the Libertarian, won 172,136 votes – or 3.6%. Even Jill Stein, for the Green party, took 51,463 and 1.1%.

Amash could make a big difference. The parlour game of the week for Washington pundits, therefore, involved trying to weigh whether Amash’s candidacy would hurt Biden or Trump more.

He also follows in a long tradition of third-party campaigns that have struggled to break through in a society that prizes choice but has been slow to embrace the type of multiparty democracies seen in Europe.

The only third-party candidate to gain more than a quarter of the vote was a man who had already occupied the White House. Having been denied the Republican nomination in 1912, former president Theodore Roosevelt ran as a Progressive or “Bull Moose” party candidate and won 27%, not enough to deny Woodrow Wilson the presidency.

Robert La Follette, Strom Thurmond, George Wallace, Eugene McCarthy and Ron Paul are among those who tried and failed to break the duopoly. In 1992, Ross Perot, an eccentric Texan billionaire, took 19% of the vote, arguably denying George HW Bush a second term and putting Bill Clinton in the Oval Office. Perot ran again in 1996 but only garnered 8%.

In 2000, Nader’s Green Party bid took less than 3% of the vote but was widely blamed for having cost Democrat Al Gore vital support and contributed to George W Bush’s narrow win, a fork in the road that had dizzying implications for the Iraq war, climate crisis and the entire shape of the 21st century.

Bob Shrum, a senior adviser for the Gore campaign, said this week: “I haven’t forgiven him. I think whatever good he did in the early part of his life is more than made up, for example, by the Iraq war. He hurt because he attacked Gore from the left: that was his argument. I don’t know that Amash is in the same position. The assumption that he would take votes from Biden rather than Trump seems dubious to me at best.” 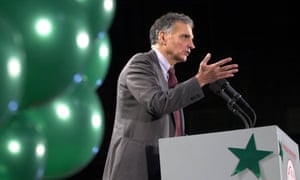 Now 86, Nader is a consumer advocate who still follows politics closely, firing off columns and newsletters. He denies that his candidacy handed the presidency to Bush.

“There are all kinds of other reasons that the Democrats lost,” he said. “Gore doesn’t blame the Green Party at all. He said: ‘It’s us. We did it. I lost my home state of Tennessee. We bungled it in Florida.’ On and on.

“And then George Bush wasn’t elected, he was selected by five out of nine supreme court justices in a judicial coup d’etat [following a dispute over the count in Florida]. The only way the Democratic party can explain its constant loss to the worst Republican party in history is to scapegoat the Greens. It’s built into their DNA.”

Nader ran in 2004 and 2008 but polled less than 1% both times. Campaigning could be a frustrating experience, he recalls.

“Almost all the interviews had nothing to do with my agenda, which was a precursor to Bernie Sanders’ agenda – universal healthcare, free tuition, living wage, cracking down on corporate crime. All they wanted to ask about was ‘spoiler’ and that’s partly because the Democratic party is much more scapegoating toward the small left parties than the Republican party is to the Libertarian party.

“I don’t know whether that will happen this year, but by far the Democrats are much more aggressive to get third-party candidates like the Green Party off the ballot, harassing them, calling them spoilers and setting the media’s agenda for spoilers.

“Even the European media would call me up and say: ‘Do you think you’re helping George W Bush? Are you a spoiler?’ And I’d say: ‘Spoiler? I’m trying to fight a spoiled political system.’ A multi-party system creates more meaning for voters because it gives them more voices and choices.”

Nader welcomes the entry of Amash and others as an expression of first amendment freedoms but is uncertain about the likely political consequences.

“If he plays his cards right and he basically is viewed as the lawmaker who stood up to the foul mouth, snarling, lying, bungling betrayer of his own voters, then he will take more from Trump,” he said of Amash. “But if he tries to appeal to all voters, then it’s another equation and nobody knows what’s going to happen.”

Johnson, a former governor of New Mexico, came third in 2012 and did so again in 2016. But it was the Green candidate, Stein, who was accused of robbing Clinton of the presidency after gaining more votes in Michigan and Wisconsin than Trump’s margin of victory in both states. 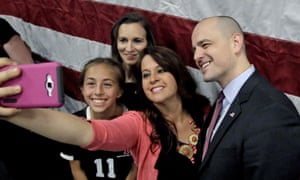 In Utah in 2016, Evan McMullin, a former CIA operations officer, finished third in his home state with 21% of the vote.

Now executive director of the pro-democracy group Stand Up Republic, he said: “You take criticism from both sides when you run as a third-party candidate or as an independent. There are committed partisans on both sides, but there are also millions of Americans who are fed up with the two-party system and who don’t feel well-represented by either party. They’re looking for something new.”

McMullin would like to see America move beyond the two-party system.

“We need more parties and more open ballot access so that voters have more choices,” he said. “We live in a country of such abundant choices in every aspect of our lives.

“But when it comes to politics, we’re offered only two. It doesn’t serve our country well to have only flavour A and flavour B and that’s it. That won’t help us overcome modern challenges in healthcare, information warfare, employment and the national debt. We need more competition and more ideas.”

Amash could prove attractive to small-government Republicans who already lean libertarian. But the former Illinois congressman Joe Walsh, who challenged Trump in this year’s Republican primary, argues that this is not the time.

“I think it’s a huge mistake, it’s the wrong thing to do,” he said. “It will help get Trump elected. Amash and I are friends, we’re colleagues, but he’s clearly putting what’s best for Justin Amash ahead of what’s best for the country. If he does it, it’s a selfish thing for him to do. It is very disappointing.

“Disaffected Republicans and conservatives who don’t want to vote for Trump, if their only option is Biden, they’re going to have to hold their nose and vote for Biden. But if these disaffected Republicans and conservatives now have another option, they’ll do it. It will take votes away from Biden. Here’s the thing: Amash knows that Donald Trump is an existential threat to this country. He voted to impeach Trump.”

Walsh, who has quit the Republican party, describing it as a cult, looks forward to the day of multiparty democracy. But first, he argues, Trump is the clear and present danger.

“Justin Amash and I, we’re brothers in that we agree on almost all the issues. I agree with Justin that both political parties suck. I agree that our political system is broken. But not this year.

“This year, the biggest threat to the country is Donald Trump and all of us, from libertarians like me and Amash to liberals, gotta come together to make sure Trump loses. And the we can start a third party or a fourth party or do whatever.

“But right now, the only job for all of us is to get rid of Trump.”