Prominent Hong Kong democracy activists have responded to China’s crackdown on opposition politicians, student campaigners and tenured academics by considering tactics that would have seemed exaggerated in the open city a few months ago.

The student leader Nathan Law, who was placed on a police “wanted” list just weeks after flying into exile in the UK, said he would cut off all contact with relatives living in his home city, in an apparent bid to protect them from suspicion or pressure.

Prominent Hong Kong democracy activists have responded to China’s crackdown on opposition politicians, student campaigners and tenured academics by considering tactics that would have seemed exaggerated in the open city a few months ago.

The student leader Nathan Law, who was placed on a police “wanted” list just weeks after flying into exile in the UK, said he would cut off all contact with relatives living in his home city, in an apparent bid to protect them from suspicion or pressure.

“Since leaving Hong Kong, I have also stopped contacting members of my family. From now on, I’ll sever my relationship with them,” he said in an online statement, committing to campaigning in exile.

He may be learning from mainland Chinese dissidents. Efforts to silence critics abroad have included targeting family members still inside the country.

Hong Kong’s opposition is grappling with the implications of a sweeping new national security law imposed by Beijing. It has abruptly curtailed the freedom of expression that until now allowed the city’s pro-democracy activists to push for change, even inside a political system that China had stacked against them.

The government says the law won’t harm freedom of expression, but police have already arrested people for carrying a HK independence flag, protest movement slogans have been banned, and a senior academic fired over his pro-democracy activism.

Politicians and campaigners have vowed they will continue to fight for representative government, and the freedoms Hong Kong was promised at the 1997 handover from British colonial rule. But they are also aware their tactics may need to change, and their unity will be tested as they adjust to a harsh new reality.

“These are difficult moments, but we can only stand and fight,” said Alvin Yeung, leader of the Civic Party and one of 12 pro-democracy candidates barred from standing in elections. The move was taken as a sign that Beijing wanted to eliminate even moderate dissent from the corridors of power in Hong Kong.

“We joke among ourselves ‘welcome to 2047’,” Yeung said, referring to the year when the city is meant to complete its full transition to Chinese control under the handover deal. “This is going to be a long winter, and its going to be brutal, but as long as we stay together and united, we will survive.”

The national security law was only made public by Beijing on the day it came into effect. Kenneth Chan, an academic and former politician, compared that almost instant transformation of the city’s way of life to the decision by communist authorities to seal off East Berlin 59 years ago.

“The national security law is like the (Berlin) wall that came up overnight, everyone is held hostage. So free-thinking Hong Kongers really have to reconsider different approaches to politics, civil society and life in general,” he said

The city’s campaigners may look for inspiration to activists from the last century who fought communist authoritarianism behind the Iron Curtain in Europe. 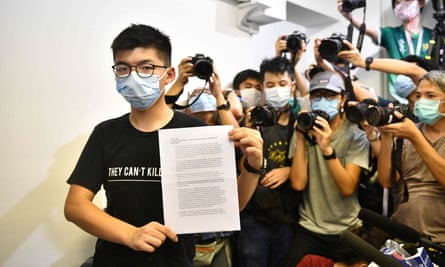 Joshua Wong holds up his notice for disqualification at a press conference in Hong Kong on 31 July. Photograph: Anthony Wallace/AFP/Getty Images

“We might have to learn from Václav Havel and other dissidents from the from eastern bloc to find new ways to speak truth,” he said, citing the Czech playwright who led his nation after the collapse of communism.

Authorities have already made clear they will interpret the law broadly; penalties stretching to life in prison will persuade some people to avoid politics.

“Of course, there would be some who would drop out or even leave Hong Kong. But I can safely say there are people who will carry on,” said Emily Lau, a veteran politician and former chair of the Democratic Party.

Those who do fight on would “draw from overseas experience and mainland China”, but she said the opposition needed to prepare for a long war, and not “rush ahead like a mad bull”.

“We are confronting such a brutal regime. If you are not clever, you may only last a few months then get arrested and disappear,” she said. “We need to have the wisdom and intelligence to carry on with the struggle, and get the people’s support.”

Anthony Dapiran, a Hong Kong-based writer and lawyer who has written about the city’s history of protest, sees some hope in “a great outburst of creativity in Hong Kong”, from street art to screen, sparked by recent protests. Even if conventional political channels are stifled, more oblique critiques and challenges may still be possible in art, he said.“I can’t help wondering, given the repression we are seeing, and the sense of creative people that want to continue to express themselves, might we see the kind of creative expression you saw in the eastern bloc where it was the poets and filmmakers and artists who carried the flag for dissent, when others weren’t able to?”