The 258-year-old spirit is one of only three such bottles in existence today, an auction house says. 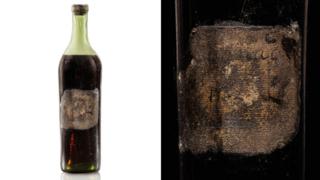 One of the world's oldest bottles of Cognac has been sold in an online auction for £118,580.

The spirit dates back to 1762 and has been stored in a family cellar for the past 140 years. It should still taste good, Sotheby's auction house said.

The bottle was bought by a private collector in Asia and has set a record for the most expensive bottle of Cognac sold at auction, Sotheby's added.

It is one of only three bottles of the rare Gautier Cognac still in existence.

Of the two other smaller bottles, one is in a museum in France and the other was sold at auction in New York in 2014 for about £48,000, Sotheby's said.

Much like champagne, only brandy made in the French region of Cognac can bear the prestigious name.

The auction house's spirits specialist, Jonny Fowle, said in the run-up to the sale that the 258-year-old bottle should still taste good.

He said the condition of the bottle was "really good" and there had been little evaporation.

"We can assume the alcohol level in it is pretty high and that would have acted as a preservative for hundreds of years. The liquid in the bottle would have maintained its character," he added.

"But I've not been lucky enough to taste it."