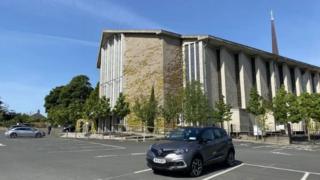 Image copyright RTE Image caption Parishioners were able to attend Mass at the Church of the Guardian Angels in Blackrock, Dublin

Dublin's Catholic archbishop has warned churches to adhere to Covid-19 restrictions after one opened its doors for Mass.

Archbishop Diarmuid Martin said the pandemic required sacrifice "on the part of all of us".

It was reported that people had been attending Mass at the Church of the Guardian Angels in Blackrock, Dublin.

Churches in the Republic of Ireland are only open to the public for private prayer with social distancing.

Funerals with a maximum of 10 people in attendance are also allowed.

The archbishop said public health policy would only work when it is fully respected by all.

In a statement published on the Archdiocese of Dublin website, Archbishop Martin said "there is no room for self-dispensation from or self-interpretation of the norms".

He added that "jumping the queue by individuals or communities puts everyone at risk".

"I have reminded all parishes this week that disregard for the norms of public health is something that is unacceptable."

According to Irish broadcaster RTÉ, the church's parish priest, Fr Dermot Leycock, said that members of the public had been allowed to enter for Mass, as long as they adhered to social distancing guidelines.

He said that initially those who wished to attend Mass stayed in a porch area at the back of the church but that "around 10 days ago", during windy weather, an area was set up just inside the porch to allow parishioners to sit down.

Fr Leycock said that the doors of the church would now remain closed during daily mass services at 10:00 local time until he was "given the all clear" to allow members of the public to attend again.