Coronavirus US live: Trump says distancing guidelines will 'fade out' as US deaths pass 60,000

As Georgia governor Brian Kemp moves to reopen businesses in the state, against the advice of public health officials and the president, Black Georgians are disproportionately getting sick.

In a survey of eight Georgia hospitals, researchers found that out of 305 Covid-19 patients, 247 were Black. The results were released by the Centers for Disease Control and Prevention today.

Related: Why is coronavirus taking such a deadly toll on black Americans?

As coronavirus tore through jails and prisons across the United States, California reduced bail for most low-level offenses to $0, allowing thousands of defendants to wait out their court dates at home instead of in custody.

Online demand for the anti-malaria drug hydroxychloroquine surged by more than 1,000% after Donald Trump endorsed it as a potential treatment for Covid-19 without providing evidence it worked, a new study has found.

There are no proven prescription therapies to treat Covid-19, the disease caused by the coronavirus. Despite the lack of evidence, the presidential endorsement drove up online searches for buying hydroxychloroquine, and its chemical cousin chloroquine, by 1,389% and 442% respectively.

Internet searches remained high, researchers said, even after NBC News reported an American couple had accidentally poisoned themselves by taking a liquid containing chloroquine meant to treat parasites in fish tanks, following a Trump press briefing in which he promoted the drug.

“We know that high-profile endorsements matter in advertising, so it stands to reason that these endorsements could spur people to seek out these medications,” said Michael Liu, a graduate student at Oxford University and the study’s first author, in a statement.

As Georgia governor Brian Kemp moves to reopen businesses in the state, against the advice of public health officials and the president, Black Georgians are disproportionately getting sick.

In a survey of eight Georgia hospitals, researchers found that out of 305 Covid-19 patients, 247 were Black. The results were released by the Centers for Disease Control and Prevention today.

African Americans, who make up 30% of Georgia’s population, overall account for 36% of confirmed cases, according to state data.

As coronavirus tore through jails and prisons across the United States, California reduced bail for most low-level offenses to $0, allowing thousands of defendants to wait out their court dates at home instead of in custody.

The response across the criminal justice system in the state has been disparate, echoing longstanding tensions about reform. Prosecutors in Tulare county have “worked around the clock” to oppose the early release of more than 1,000 defendants, according to the district attorney there. In Los Angeles, leaked emails showed the district attorney’s office instructing prosecutors to seek a loophole in the new bail schedule for some cases. And police unions in cities across California have argued the emergency schedule will lead to an uptick in crime.

Hanging over the bail schedule debate is a referendum in November, when Californians will get to decide whether the state should eliminate its bail system moving forward. The success or failure of the emergency guideline, beyond the infection rate of the state’s inmate population, has the very real possibility of becoming a talking point in all future debates for bail reform for years to come, criminal justice reform advocates say.\

Here’s what you need to know about Justin Amash, the Michigan congressman who announced plans to jump into the presidential race as a Libertarian candidate, from The Guardian’s Daniel Strauss:

Amash, 40, is a lawyer by trade who first served in the Michigan statehouse before ascending to the US Congress in 2010 during the Tea Party wave. Amash, in his first campaign, benefited from support from major Tea Party groups.

In 2019 Amash left the Republican party in protest of its seemingly immovable support for Donald Trump. He decided to join the Libertarian party and has served as one of the few members of Congress not part of the Republican or Democratic party. 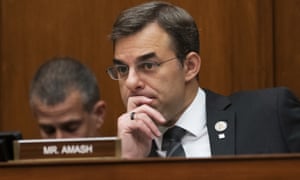 Could Amash’s candidacy have an impact in the 2020 presidential election?

It’s possible. Amash, a fiscal conservative, could siphon away right-leaning voters disinclined to vote for Trump from former vice-president Joe Biden. Or his candidacy could attract small-government Republicans away from Trump to the benefit of Biden.

His chances of winning the presidency are slim. Amash is getting into the race late and no presidential candidate running on the Libertarian party has ever actually been elected president. They usually perform poorly.

What is his relationship with Trump?

Contentious. Amash has been a vocal critic of the president and the feeling is mutual. When Amash announced he was leaving the Republican party, Trump tweeted: “Great news for the Republican Party as one of the dumbest & most disloyal men in Congress is ‘quitting’ the Party. No Collusion, No Obstruction! Knew he couldn’t get the nomination to run again in the Great State of Michigan. Already being challenged for his seat. A total loser!”

(Amash, at times, has been mentioned as a potential candidate for statewide office but has never actually run for Senate or governor.)

The White House meeting with business executives – which in many ways resembled a coronavirus briefing – just ended.

As he’s done at briefings, Trump took questions from reporters, alongside Mike Pence and Steven Mnuchin, the Treasury secretary. The president made many of the same claims he’s made at press briefings, blithely repeating that the pandemic will soon “be gone”, without explaining why.

But there were a few key differences between the press briefings and today’s live-streamed meeting. Trump’s public health advisers were absent. And notably, the camera was continuously focused on Trump – there was no footage of the reporters in the room asking questions.

Trump said he’s planning a trip to Arizona next week, and Ohio soon.

“Hopefully in the not too distant future we’ll have some massive rallies and people will be sitting next to each other,” Trump said. “I can’t imagine a rally where you have every fourth seat full, every six seats are empty for everyone you have full. That wouldn’t look too good.”

The president suggested that a vaccine may not be needed as part of a recovery from the pandemic. “If you don’t have a vaccine, if the virus is gone, you’re like where we were before,” he said.

At least 89 coronavirus vaccines are in development, according to the World Health Organization, but even the most promising options still need to undergo rigorous safety testing, which could take a year to 18 months.

But without a vaccine, why does Trump think the pandemic will just go away? He dodged the question.

Daniel Kelly, the conservative Wisconsin supreme court justice who lost his re-election bid earlier this month, will participate in a controversial case before he leaves the court over whether more than 200,000 voters should be removed from the state’s voter rolls.

The Wisconsin supreme court is currently considering whether to hear the case, which was brought by the Wisconsin Institute for Law and Liberty, a conservative legal group. The group wants to force the state to immediately remove voters it suspects have moved from the voter rolls. The state has refused to remove the voters, saying it is not confident enough the voters have moved and wants to give voters until after the 2020 election to confirm their voter registration.

Last year a circuit court judge ordered the state to remove the voters, but an appeals court reversed the ruling. The suit is being closely watched because it is believed to be an obvious effort to benefit Donald Trump, who won the state by just under 23,000 votes in 2016. Voters who lived in zip codes that were predominantly students or African Americans were more than twice as likely to be flagged for removal, a Guardian analysis found.

Kelly recused himself in November when the court considered a request to hear the case on an expedited basis. His recusal made a difference – the court wound up deadlocking 3-3. Kelly lost his election to Jill Karofsky, a liberal challenger, by more than 163,000 votes. But now that the election had passed, Kelly said he saw no ethical obstacle preventing him from hearing the case. “In light of the fact that this case cannot now affect any election in which I would be a candidate while the case is being decided, there is no ethical bar to my participation in the consideration of the petition for review or the merits of the case if the petition for review is granted,” Kelly wrote in a Wednesday order. Karofsky’s 10-year term begins on 1 August, and she will narrow the conservative majority on the court from 5-2 to 4-3.

Stephen Gillers, a law professor at NYU and an expert on judicial ethics, said he did not see anything improper in Kelly’s decision. “It is rare but not unheard of for a judge who recuses to unrecuse,” he wrote in an email. “Judge Kelly is still a judge and the matter is before his court. The reason for the prior recusal, which was correct at the time, is no longer present. So it is fine to reverse his position.”

“I see the new normal being what it was three months ago,” Trump said. I think we want to go back to where it was.”

So far, his public health advisers have disagreed. The new normal, per Dr Anthony Fauci and Dr Deborah Birx, as well as the president’s own plan to reopen the economy, suggest that distancing will have to be scaled back slowly.

Hi, it’s Maanvi Singh – blogging from the west coast. The president is speaking at a White House with industry executives.

“I don’t see protecting cities and states if they’re going to be sanctuaries,” Trump said. Municipalities that prevent their law enforcement from cooperating with immigration authorities shouldn’t get federal coronavirus aid, he said.

That’s it from me today. My west coast colleague, Maanvi Singh, will take over the blog for the next few hours.

Here’s where the day stands so far:

Maanvi will have more coming up, so stay tuned.

Vice President Mike Pence said he expects the US to be conducting 2 million tests a week next month.

That would work out to about 285,000 tests being conducted every day, but some health experts have said the country will need to conduct millions of tests a day to effectively limit the spread of the virus.

In a tweet, the mayor called the large processional “absolutely unacceptable”, and vowed to bring social gatherings such as that event to an end while movements are still restricted by coronavirus guidelines.

A follow-up tweet from the mayor drew criticism for singling out the Jewish community and generalizing about its members:

My message to the Jewish community, and all communities, is this simple: the time for warnings has passed. I have instructed the NYPD to proceed immediately to summons or even arrest those who gather in large groups. This is about stopping this disease and saving lives. Period. April 29, 2020

Jonathan Greenblatt, CEO of the Anti-Defamation League, tweeted that generalizing New York’s Jewish population “is outrageous especially when so many are scapegoating Jews”.

On Wednesday morning De Blasio apologized at a press event for a heavy-handed response, saying: “If you saw anger and frustration, you’re right. I spoke out of real distress. People’s lives were in danger right before my eyes.”

Mayor de Blasio on his tweet singling out the Jewish community for large gatherings: “If in my passion and in my emotion I said something that was hurtful, I'm sorry" but he has "no regrets calling out this danger" and says the city will "deal with it very, very aggressively” pic.twitter.com/9poDjhgZR5 April 29, 2020

On the same day as the funeral, crowds gathered to watch a city flyover by the US navy’s Blue Angels and the air force’s Thunderbirds planes in honor of healthcare workers.

“Only bigots have a problem when a few 100 Hasidim do what thousands of people in the same city have done the same day: not social distance,” the Orthodox Jewish Public Affairs Council tweeted.