What have resurgences around the world taught us about how local clusters emerge?

It is not always possible to pinpoint the origin of a local spike in cases, particularly in countries like the UK, where the disease is still circulating at relatively significant levels.

But in countries where overall caseloads are lower, and with rigorous test-and-trace schemes, it has been possible to pinpoint the factors that have sparked or fuelled local outbreaks.

It is not always possible to pinpoint the origin of a local spike in cases, particularly in countries like the UK, where the disease is still circulating at relatively significant levels.

But in countries where overall caseloads are lower, and with rigorous test-and-trace schemes, it has been possible to pinpoint the factors that have sparked or fuelled local outbreaks.

Hong Kong’s recent spike in Covid-19 cases – more than 100 new cases for nine days in a row – is thought to have been caused in part by visitors who were given exemptions from its otherwise strict quarantine rules, which require new arrivals to spend 14 days in isolation.

About 200,000 people, including boat and plane crews, and executives of listed companies, were allowed to enter the city without quarantine. Authorities said that they needed to come and go to keep the city or its economy going. It is a global air-hub, and relies on imported food.

The country had brought in the travel restrictions to halt a second wave of infections in March, and they had been largely effective. But the latest outbreaks suggest that they need to be comprehensive if they are to keep infections down.

In both South Korea and France, a local spike in infections has been linked to nightclubs. Last week a seaside resort on the Brittany coast reported dozens of infections, mostly among 18- to 25-year-olds. Contact-tracing suggested that the outbreak began with a single summer worker.

The now-infected worker had gathered with others at a disco, which had been allowed to reopen after blocking off the dance floor with tables. Government officials have attacked the “irresponsibility of young people”.

In Seoul in May, a 29-year-old man was also linked to dozens of new cases after he visited five nightclubs. Authorities responded by clamping down on nightlife venues.

Meat-processing plants, where people work in cramped conditions, have served as incubators for the disease in more than one country.

In Germany, in June, more than 1,500 workers were infected at a slaughterhouse in North Rhine-Westphalia. In the US, multiple Covid-19 hotspots have been linked to meat-processing plants, where poultry, pigs and cattle are slaughtered and packaged, from Kansas to Missouri and Nebraska.

And last month, a significant outbreak in Beijing was linked to the city’s largest wholesale market and a government food-safety inspection body. 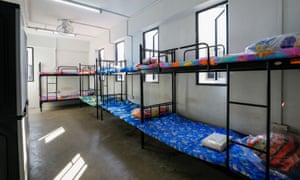 Sleeping quarters in the Westlite Papan dormitory for migrant workers who have recovered from Covid-19, Singapore. Photograph: AFP via Getty Images

Singapore appeared to have brought the disease rapidly under control at the start of the year, and was hailed as an early success story.

But Covid-19 was still spreading rapidly among migrant workers living in dormitories, often 10 to 20 to a room, who were not able to follow social distancing guidelines. The city state has now recorded more than 50,000 cases, and those workers account for the vast majority.

The government responded with a quarantine and testing regime, which has so far covered 250,000 workers; it expects to complete testing in August and forecasts that cases will then drop.

These have been identified as a driver of wider outbreaks – but also a source of local spikes – since the early days of the pandemic. South Korea was one of the first countries outside China to have a major outbreak, and many of its cases were traced back to services at a megachurch.

Despite that, mass gatherings continue in countries with known coronavirus cases – in the UK this month several infections were traced to a single crowded pub in Staffordshire.