Denmark and the Czech Republic have said partially easing their lockdowns has not led to a surge in new coronavirus infections, as the WHO continued to urge extreme caution and Germany relaxed some restrictions but extended others.

As EU governments grappled with the complex and conflicting imperatives of easing the lockdowns crippling their economies while avoiding a disastrous second wave of infections, meanwhile, South Korea reported no new cases for the first time.

Related: Coronavirus world map: which countries have the most cases and deaths?

Epidemics of infectious diseases behave in different ways but the 1918 influenza pandemic that killed more than 50 million people is regarded as a key example of a pandemic that occurred in multiple waves, with the latter more severe than the first. It has been replicated – albeit more mildly – in subsequent flu pandemics.

Denmark and the Czech Republic have said partially easing their lockdowns has not led to a surge in new coronavirus infections, as the WHO continued to urge extreme caution and Germany relaxed some restrictions but extended others.

As EU governments grappled with the complex and conflicting imperatives of easing the lockdowns crippling their economies while avoiding a disastrous second wave of infections, meanwhile, South Korea reported no new cases for the first time.

Of the 44 European countries to have imposed restrictions to curb the spread of the virus, 21 had started easing some of them and a further 11 were planning to do so soon, said Hans Kluge, regional director of the World Health Organization in Europe.

Kluge warned that all governments must remain extremely circumspect. “As I have said before, this virus is unforgiving,” he said. “We must remain vigilant, persevere and be patient – and ready to ramp up measures again as and when needed.”

There was, though, encouraging news from the Czech Republic and Denmark, where phased exits from strict lockdowns implemented early in the pandemic are under way. In Denmark, daycare facilities and schools began reopening two weeks ago, followed by hairdressers and other small businesses on 20 April.

“There are no signs at all that the partial reopening has caused a bigger spread of infection,” said Christian Wejse, a scientist at the department of infectious diseases at Aarhus University. “At least there is no indication that we are heading into another wave. That has been the concern, but I can’t see that at all.”

The Czech health minister, Adam Vojtěch, said the country’s number of new cases had been below 100 for the past eight consecutive days and also reported that a staggered reopening of shops and services had not so far led to a surge in infections.

“So far we do not see a negative trend resulting from previous relaxations,” Vojtěch said. “We will proceed with caution, gradually in the upcoming waves, and I believe we are on a good path.”

Proceeding cautiously, Germany on Thursday said places of worship, museums, gardens, zoos, playgrounds and monuments could reopen over the coming days after the chancellor, Angela Merkel, met the heads of the 16 German states

But the federal government and state leaders postponed decisions on whether to reopen all schools and kindergartens and said physical distancing rules would stay in place at least until 10 May, with no further relaxations to be decided before 6 May.

Merkel said reopening cafes and restaurants at this stage would be problematic because of the difficulty of checking whether “people around one table are from one family, or from different households”. She said Germany’s goal currently remained to prevent the virus from spreading rapidly.

“We don’t have any medication, we don’t have any vaccine against the virus and ... therefore, the goal will always be to slow down the virus,” Merkel said, adding that Germany had so far been “successful in achieving this goal.”

Germany began easing its lockdown last week, when some shops were allowed to open provided they practised strict social distancing, but Merkel and government advisers have expressed serious concerns about the dangers of going to far, too fast, with the risk of the infection rate stating to rise again. 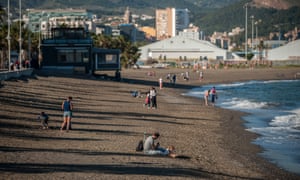 In Spain, where the daily death toll fell to its lowest in six weeks on Thursday, the health minister announced time slots for specific outdoor activities, in an effort to avoid confusion and further contagion when adults are allowed out on Saturday to exercise for the first time since mid-March.

Salvador Illa said that except in smaller towns with fewer than 5,000 inhabitants, people would be allowed out to walk or take other exercise from 6am to 10am and 8pm until 11pm, while people who needed carers or were over 70 could be out from 10am to midday and from 7pm until 8pm.

Parents will be able to accompany children aged under 14 on walks between midday and 7pm. “We need to keep acting very wisely and very prudently and follow expert advice,” Illa said. “We got into this together and we need to get out of it together. There’s no other way.”

France categorised each of its 95 départements as either red, amber or green according to its risk level, with much of the north and east of the country – including Paris – red, and much of the west and south-west green. Based on infection rate and intensive care bed capacity, the designation will be updated daily until 7 May, when a decision will be made on how fast each will be able to come out of lockdown on 11 May.

Under pressure from some regional politicians to lift Europe’s longest lockdown sooner, Italy’s prime minister, Giuseppe Conte, also said the country’s gradual return to normality must be carefully coordinated and based strictly on scientific advice, if it did not want to see a surge in infections.

“I’ll say this clearly, at the risk of appearing unpopular,” Conte told parliament on Thursday. “The government cannot immediately ensure a return to normality ... We are still in this pandemic.”

The economic devastation wrought by Covid-19 on the continent, however, is already apparent. After Germany on Wednesday said it faced its worst recession since 1949, France, Italy and Spain revealed equally dire figures on Thursday.

Epidemics of infectious diseases behave in different ways but the 1918 influenza pandemic that killed more than 50 million people is regarded as a key example of a pandemic that occurred in multiple waves, with the latter more severe than the first. It has been replicated – albeit more mildly – in subsequent flu pandemics.

How and why multiple-wave outbreaks occur, and how subsequent waves of infection can be prevented, has become a staple of epidemiological modelling studies and pandemic preparation, which have looked at everything from social behaviour and health policy to vaccination and the buildup of community immunity, also known as herd immunity.

Is there evidence of coronavirus coming back elsewhere?

This is being watched very carefully. Without a vaccine, and with no widespread immunity to the new disease, one alarm is being sounded by the experience of Singapore, which has seen a sudden resurgence in infections despite being lauded for its early handling of the outbreak.

Although Singapore instituted a strong contact tracing system for its general population, the disease re-emerged in cramped dormitory accommodation used by thousands of foreign workers with inadequate hygiene facilities and shared canteens.

Singapore’s experience, although very specific, has demonstrated the ability of the disease to come back strongly in places where people are in close proximity and its ability to exploit any weakness in public health regimes set up to counter it.

What are experts worried about?

Conventional wisdom among scientists suggests second waves of resistant infections occur after the capacity for treatment and isolation becomes exhausted. In this case the concern is that the social and political consensus supporting lockdowns is being overtaken by public frustration and the urgent need to reopen economies.

The threat declines when susceptibility of the population to the disease falls below a certain threshold or when widespread vaccination becomes available.

In general terms the ratio of susceptible and immune individuals in a population at the end of one wave determines the potential magnitude of a subsequent wave. The worry right now is that with a vaccine still months away, and the real rate of infection only being guessed at, populations worldwide remain highly vulnerable to both resurgence and subsequent waves.

South Korea, meanwhile, once one of the hardest-hit countries in a pandemic that has so far infected more than 3.2 million people worldwide and killed nearly 230,000, reported no new cases for the first time since the disease was detected there, boosting hopes of an eventual return to normality.

An aggressive test-and-trace strategy and widespread social distancing had allowed the country to bring the spread of the virus under control, President Moon Jae-in said. “This is the strength of South Korea and its people,” he declared on Thursday.

Elsewhere, the virus continued to advance. Cases in Russia surged past 100,000 on Thursday as the country recorded its largest daily increase. The country is now the centre of the outbreak in Europe, but a relatively low death total of 1,073 prompted the Kremlin spokesman Dmitry Peskov to say it had avoided a catastrophic “Italian scenario”.