A trial with the Irish health authority uses drones to bring prescriptions straight to the door. 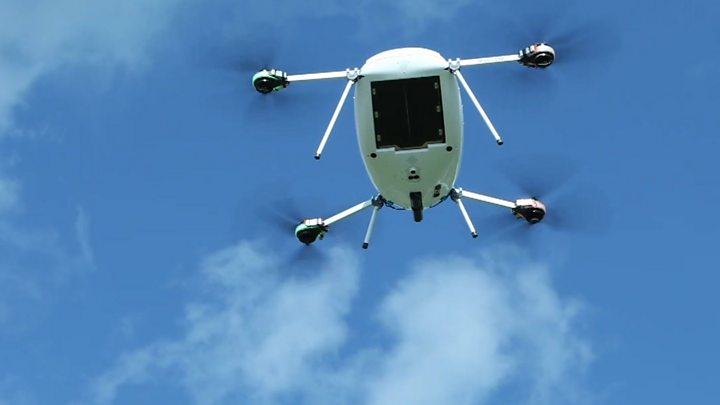 A drone company that had to abandon its fast-food delivery tests has partnered with Ireland's health authority to deliver prescriptions instead.

Manna Aero is working with the Health Service Executive to prescribe and deliver medicines and other essential supplies to vulnerable people in the small rural town of Moneygall.

The company's trial uses autonomous drones made in Wales.

And it is looking at the possibility of testing in the UK within weeks.

The UK has already announced a test of drones to carry supplies to the Isle of Wight during the pandemic.

Also, in Florida, care home residents will soon be able to have their prescriptions delivered.

But those tests are on fixed flightpaths.

And the Irish flights are going straight to homes, the final stage of a "closed loop" end-to-end system the company says is a first.

Local GPs write prescriptions after a video consultation, which drones then drop off at patients' homes.

The craft can also deliver essential supplies - such as milk or bread - to those who are not supposed to go outside.

Image caption After a video consultation, Fidelma's medicine arrives at her door by drone

"I thought I would never see the day that there would be such technology that I wouldn't have to be driving into town and back up to get my medicine - brilliant," she said.

Dr Colm O'Reilly, a GP in nearby Toomevara, said it was "a great assistance in a rural area where there may not be as much support as you might have in the city".

"In these troubled times, it's great to see how technology is coming together to assist us in helping our patients," he said.

Manna Aero chief executive Bobby Healy said he wanted to bring the trials to the UK to "show people what we can do - perhaps work with the NHS".

"We are actually looking to do that in the next few weeks - on the assumption that lockdown is going to continue," he said.

The idea was born after a very different trial - to deliver takeaways to college students in mid-March - was put on hold because of the pandemic.

The drone can carry up to 4kg (9lb) in its cargo cassette, which is about the size of a large shoebox - but the focus has shifted.

"We're not going to be selling hamburgers," Mr Healy said.

"We're going to be selling what the elderly people really need to have - so basic necessities."

The mobile command centre for the drones is based at Barack Obama Plaza, a motorway services renamed in 2011 when the US president came to visit the home of one of his Irish ancestors.

Manna Aero says it is equipped to handle up to 100 deliveries a day.

And with some 500 towns in the Irish Republic of roughly the same size, it hopes the Moneygall test will "validate the concept" for rural deliveries across Ireland and the UK.

"It's about proving that if there's a world in future where you need to do a lockdown, at scale, that drones can be a massive solution," Mr Healy said.

The drones are built about 10 miles north of Cardiff - a centre of excellence for aviation already home to thousands of Airbus employees.

They can fly in moderate gales, though Manna chooses not to, has redundant batteries and flight computers, and a parachute for gentle descents if a "one in 10 million" failure happens.

In fact, Mr Healy prefers to call them aircraft - and points out his company is regulated as an airline.

"It's not particularly fast or any of those things.

And although the drones are completely autonomous, a pilot is present at all times to intervene.

The UK Space Agency is looking at the possibility of creating air corridors between different locations in the coming months - to aid the fight against Covid-19.

"This is going to be something where you find a few hospitals who are aware of the challenges that they are facing and up for engaging with us," applications strategy head Emily Gravestock said.

But maintaining public safety during such trials was the biggest concern of all involved, she said.

"That's the thing that has absolutely got to be proven before we put any kind of air corridor or opportunity in place," Ms Gravestock said.

"You've then got to work with the local community.

"It could concern people to have drones flying over delivering services across their properties, across their gardens."

Watch Jen Copestake's report on this week's Click programme. If you are in the UK, you can watch it on BBC iPlayer.