Since the sudden easing of a three-week lockdown in Ghana’s two major cities, Accra and Kumasi, daily life is gradually returning to normal.

Markets and commercial districts that had ground to an eerie halt have buzzed back to life. Stores and banks have slowly reopened. Modest traffic jams have emerged as many people who had escaped the lockdown return to the cities. But schools, places of worship, restaurants and bars remain shut.

Since the sudden easing of a three-week lockdown in Ghana’s two major cities, Accra and Kumasi, daily life is gradually returning to normal.

Markets and commercial districts that had ground to an eerie halt have buzzed back to life. Stores and banks have slowly reopened. Modest traffic jams have emerged as many people who had escaped the lockdown return to the cities. But schools, places of worship, restaurants and bars remain shut.

The reaction to President Nana Akufo-Addo’s unexpected order to ease restrictions two weeks ago has been mixed.

Among the west African country’s corporate workers and affluent classes, many people continue to work from home and fear that the easing of the lockdown is premature.

From his apartment in Accra’s affluent East Legon, 30-year-old Delvin Cooper, who works for digital creation firm Pulse Ghana, worries that the severity of the coronavirus outbreak has not fully registered in the country.

“The government should have waited at least a little bit longer,” he said. “People still haven’t got the actual understanding of what the situation is.”

However, for millions of people living on the edge, working in Ghana’s largely informal economy, each day of the lockdown deepened their worries.

Outside a small factory in a quiet neighbourhood in northern Accra, Raphael Awitor, who is in his 40s, stirs sand and cement with a shovel. Toiling in the blazing sun, he races to make as many bricks as possible. On good days he can earn 80 cedis (£11).

“I planned to come to work on Monday whether or not the lockdown was lifted,” Raphael said. “We were really hungry.”

He had become desperate after quickly spending his savings of just 300 cedis.

Ghana’s government has halved electricity costs and cancelled water bills for three months, and distributed food supplies to ease the effects of the lockdown. But the help has not reached everyone, Raphael laments. “I didn’t even see the trucks that were sharing it.”

Nearby, Nyamekye Agyemang, 55, sets her steel pots containing wraps of fufu, banku and a mix of stews on small stools in a wooden kiosk, waiting for custom from construction workers and passers-by. Food vendors were permitted to work during the lockdown but the impact on her income from reduced footfall was immense.

“If the lockdown had continued, it would have been a disaster,” she said. 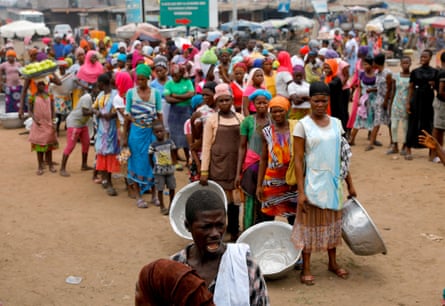 People wait to receive food and water from volunteers in Accra during the partial lockdown on 4 April. Photograph: Francis Kokoroko/Reuters

Since the lockdown was eased, however, confirmed Covid-19 cases have doubled to more than 2,000. The number of deaths stands at 17.

The government has defended its decision, arguing that the country’s early lockdown allowed it to assess Ghana’s needs, and that it bought the authorities time to boost health infrastructure, testing capacity, and pinpoint where the outbreaks were.

In his speech announcing an easing of the lockdown, the president promised to improve testing. “We are ranked number one in Africa in the administering of tests per million people,” he said.

The government said it was starting the largest investment in the country’s healthcare, with 96 new hospitals planned for the next year and improved services.

Ghana’s information minister, Kojo Nkrumah, told the Guardian the lockdown had helped the government to assess its health systems and what the country would need, based on increased data collection from Covid-19 tests.

“We decided not to wait but to do a precautionary lockdown early and within that period get mass findings and data to help us,” he said. About 110,000 tests were administered.

The government has increased its supply of ventilators, said Nkrumah, to around 200. Among the first 1,200 patients fewer than five required intensive care or ventilation.

According to Nkrumah, the length and function of lockdowns had to be decided by individual countries. “We should guard against assuming that there is a one size fits all approach. You should let the local context be applied when enforcing these lockdowns,” he said.

But pressure to ease the restrictions was mounting before the president made the decision. Ghana’s powerful Trade Union Congress had pressed Addo to adopt a different strategy.

“Nearly 90% of Ghanaians work in the informal economy,” the secretary general, Anthony Baah, told the Guardian. “In a lockdown the impact can become unbearable, so we are happy with what the government has done.” 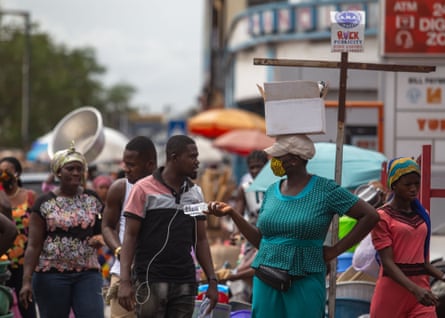 And just days after the lockdown was imposed at the end of March, pockets of demonstrations broke out in Ghana.

Traders protesting in a market in Kasoa, western Accra, said they knew the lockdown was needed to curb the spread of the virus but they were not in a position to survive it. “The president’s directive is good but it won’t help us,” said one.

The mass outcry so early on during the lockdown was a worry for the government, particularly in what is supposed to be an election year.

Many fear the government has been too hasty. Seizing the moment, former president John Mahama sparked the sparked the criticism in a tweet before Addo’s announcement. “Concerns persist that the government has taken a gamble,” he said. “Many health experts continue to suggest the necessity and appropriateness of an extension of the restrictions.”