The birds’ seven-week reign in Madrid is coming to an end.

By 9.30 on Saturday morning, the musings of blackbirds, the cooings of pigeons and the hooligan shrieks of parakeets had begun to mix with the rhythmic fall of foot on pavement, the whizzing of bikes and the wheezing of long-confined lungs.

The birds’ seven-week reign in Madrid is coming to an end.

By 9.30 on Saturday morning, the musings of blackbirds, the cooings of pigeons and the hooligan shrieks of parakeets had begun to mix with the rhythmic fall of foot on pavement, the whizzing of bikes and the wheezing of long-confined lungs.

Spain’s coronavirus lockdown, one of the toughest in Europe, is slowly being eased, and people are twitchy for the newly restored privilege of exercise.

As of first thing Saturday, adults are allowed to exercise between 6am and 10am and then 8pm til 11pm. The children’s slot is midday til 7pm, while the streets belong to older people and those who need assistance from 10am til midday and then 7pm til 8pm.

Juan Badiola, a 28-year-old teacher, was relishing his freedom as he walked along the streets of Hortaleza in north-east Madrid.

“It’s been pretty tough and I’ve been working really hard for weeks,” he said. “My family is all healthy and OK, but I’ve really missed being able to go out and make plans.”

His sister, Ana, was also thrilled to be out even if she can’t yet resume her hobby of climbing – or see her friends.

“Being able to get out again is a big deal,” said the 21-year-old student. “But people need to be responsible.”

She was not the only one worried about the large number of people suddenly returning to the streets.

José Garrido’s relief at being out – “I was in a bad mood when I left the house but I feel much better now” – was tempered with concern.

“There’s a lot of people out,” said the 54-year-old lawyer. “This hasn’t been well thought-out.”

His wife, Carolina, agreed: “It’s not really safe. There’s loads of people out and they’re all breathing really heavily.”

The fear and worry is hardly surprising given that Spain is one of the countries that has been hit hardest by the pandemic.

According to the latest health ministry figures, there have been 216,582 confirmed cases of Covid-19 in Spain, and 25,100 deaths. But there are also concerns that the true death toll could be far higher as only those who die having tested positive for the disease are counted.

Juan and Ana Badiola’s big brother, Samuel, was a little more circumspect than his siblings.

“I’ve got more freedom today than I had yesterday, but I feel the same uncertainty – that hasn’t gone away,” said the 31-year-old creative team manager.

“We just don’t know what’s really going on and whether the figures they’re giving out are accurate. I just feel very cut off from reality.”

Reminders of what Spain has been through – and what it continues to endure – are not hard to find in this part of the capital.

Hortaleza is home to the Palacio de Hielo – the huge ice rink that was transformed into a makeshift morgue to help accommodate the capital’s dead – and to Ifema, the cavernous conference centre that was turned into a 5,500-bed field hospital. 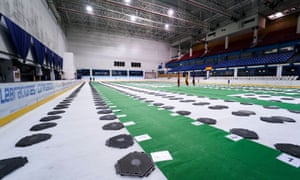 The Palacio de Hielo ice rink, which was used as a temporary morgue up until 22 April. Photograph: A Perez Meca/Rex/Shutterstock

Both the morgue and the hospital have closed in the past 10 days, but Madrid, like the rest of the country, has a long way to go as the four-phase transition to what the government calls “the new normality” begins.

On a normal 2 May, the city would be marking the anniversary of the 1808 revolt against French occupation. Today, the occupier is a virus best resisted by staying off the streets rather than taking to them.

The uncertainty – physical, social and economic – drags on, and there is a poignancy to the sign on the shuttered neighbourhood bar where parents used to stop for a postprandial G&T while handing their children money to buy sweets at the Chinese corner shop.

The cafe round the corner announces its continuing closure with a note that ends with a simple exhortation: “Chin up, Spain. Chin up, Madrid.”