In many ways, stockmarkets have been extraordinary in 2020

Finance and economics | The Economist

Editor’s note: The Economist is making some of its most important coverage of the covid-19 pandemic freely available to readers of The Economist Today, our daily newsletter. To receive it, register here. For our coronavirus tracker and more coverage, see our hub

WHEN A BEAR growls, it is natural to be frightened. Ditto in finance, where bear markets can mean rapid losses of wealth. The coronavirus pandemic led to the fastest equity bear market in history: the S&P 500 index, America’s main benchmark, took just 16 days in February to fall by 20%, the standard definition.

The bear also seems to have been an unusually short-lived member of its species. Although economic data have continued to deteriorate, share prices have staged a remarkable recovery. April was the S&P 500’s best month since January 1987. Having bottomed at 2,237 on March 23rd, it rallied by 27% by May 1st (see chart). Technically, that has put shares back into a bull market, even though they have yet to regain all their pre-pandemic losses. 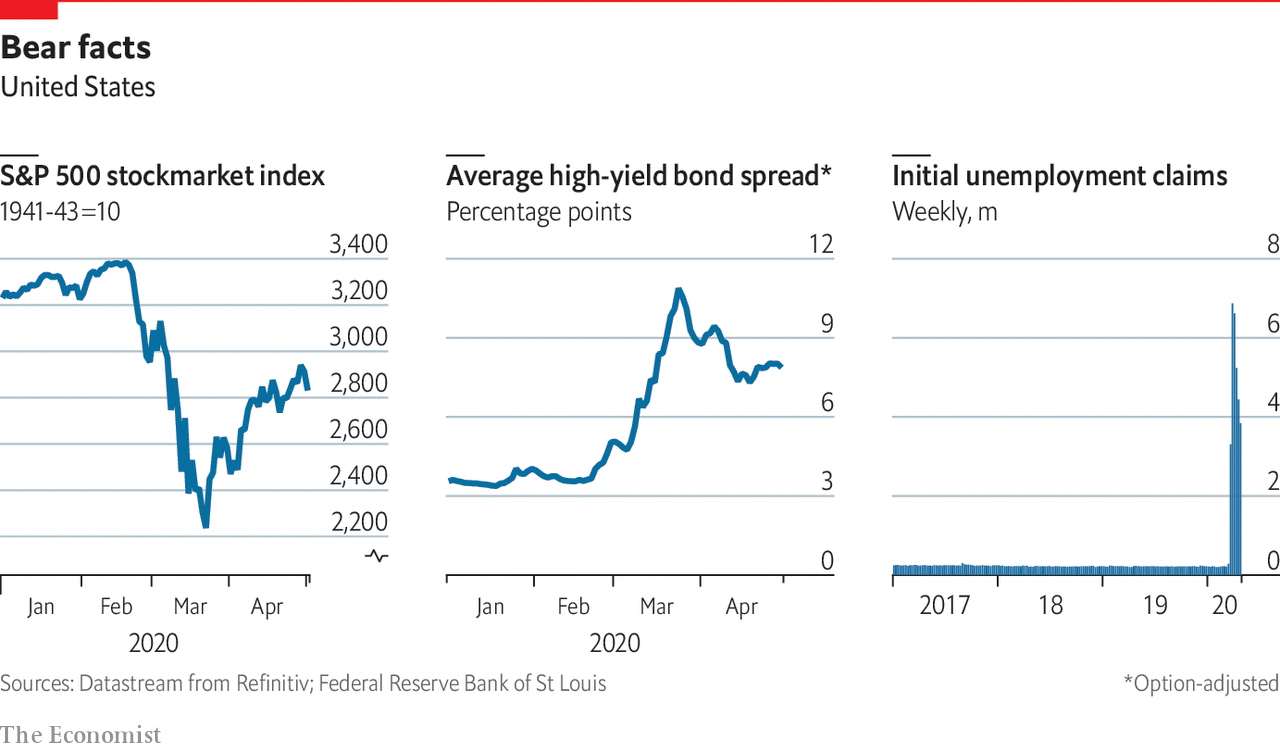 One reason for this mismatch between the markets and the economy is that official attitudes to financial downturns have changed a lot since Andrew Mellon, America’s treasury secretary under President Herbert Hoover, argued after the crash of 1929 that downturns would “purge the rottenness out of the system”. Now central banks and governments respond vigorously to economic and financial trouble, and taxpayers may bear more of the burden of the crisis than investors. The swift partial recovery is just one way in which the bear market of 2020 has been an odd specimen.

The grizzly facts
It is far from clear how the term “bear market” originated. Daniel Defoe used the term “bearskin jobber” in the early 18th century. This may in turn be linked to a saying about how it was dangerous to sell a bearskin before catching the bear. Some speculators would agree to sell shares at the current price (but at a future date) even though they did not own them. To do this, they would borrow the shares, a practice known as “short-selling”, hoping to repay the loan with shares bought more cheaply. These bears thus wanted prices to fall. More optimistic investors became known as bulls. Some suggest this is because bulls strike up with their horns while bears swipe down with their paws.

The traditional template for a market cycle, outlined by Charles Kindleberger and Hyman Minsky, two economic historians, goes through five stages: displacement, boom, euphoria, crisis and revulsion. The “displacement” takes the form of some new, positive economic development—for example, a new technology, such as the internet—justifying greater prosperity.

Sure enough, a boom then occurs. Profits rise and investors steadily become more confident. Companies borrow to expand and investors take more speculative positions by, say, buying shares on margin (putting up only a small amount of the purchase price, with the rest to be paid later). In the boom’s early stages such strategies are highly profitable, and this encourages others to follow suit.

Enter euphoria. Property is often a particular focus of speculation: the peaks of bull markets are associated with the construction of skyscrapers. At the peak, people who do not normally speculate are drawn in: in the late 1990s, investors became “day traders” in technology stocks; in the early 2000s, more people became homeowners to profit from rising property prices. Because asset prices look high on conventional measures, optimists make up new ones to justify them (eg, price-per-click for internet companies). Sceptics are dismissed as dinosaurs who just “don’t get it”.

Eventually, the boom leads to inflation, as companies compete for scarce raw materials and workers. Central banks respond by pushing up interest rates. At first, this makes little difference. But eventually something happens to dent confidence. It can be hard to pinpoint what: it may simply be that a few investors decide to cash in and take their profits. But once prices stop rising, the machine starts going into reverse.

As asset prices fall, those who have bought on margin, or with borrowed money, are forced to sell. Banks become reluctant to lend. Nervous about the value of collateral, they ask some borrowers to repay. Novice buyers retreat from the market as the prospect of juicy gains becomes uncertain. So it is difficult for forced sellers to find new buyers. The fall accelerates.

Often a scandal is uncovered. Booms are an ideal opportunity for what J.K. Galbraith, a Canadian-American economist, called the “bezzle”: fraudulent schemes that allow insiders to bilk the public. Or the problem may simply be that executives at a company are revealed to have taken far more risks than was prudent. The Depression brought the collapse of the utilities empire built by Samuel Insull; another utility group, Enron, imploded during the bear market of 2000-02.

Sore heads
Some parts of the template do fit the conditions of 2020. The bear market followed one of history’s longest bull runs, which began back in March 2009. The displacement that started the boom was central banks’ decisions to cut interest rates to new lows and to use quantitative easing to force down bond yields to support economic growth. Ever since, one of the most common arguments for buying equities was that the yields on government bonds and cash were so low.

As in previous bull markets, equity valuations rose substantially. Robert Shiller, a Nobel prize-winning economist, compiles a valuation measure which averages profits over ten years, called the cyclically adjusted price-earnings ratio (CAPE). At the start of 2020 the CAPE for the American market was 31. That compared with a historical average of 17, and peaks of 44 at the end of 1999 (during the dotcom boom) and 33 in August 1929.

When shares trade at a high multiple of past profits, the implication is that investors expect future profits to grow rapidly. But even before the pandemic, the trend was not encouraging. According to the Bureau of Economic Analysis, American corporate profits were flat in 2019. Furthermore, the world economy slowed in the face of the Sino-American trade war. Global growth was just 2.4% last year, the weakest since the financial crisis of 2007-09. Commodity prices, which usually surge at the end of a boom, drifted down after May 2018.

Another sign of impending trouble was in the bond market. Usually, the cost of long-term borrowing is higher than that of short-term finance; lenders demand more for locking up their money. But sometimes short rates are higher—a state known as an inverted yield curve, which often occurs before a recession. Parts of the yield curve inverted in March 2019 and the phenomenon has reappeared at various times since, most recently in January 2020. So share prices might have fallen even without the coronavirus.

Polar opposites
But in other respects, the coronavirus crash does not fit the template neatly. There was no inflationary surge at the end of the boom. The personal consumption expenditure index, the inflation measure targeted by the Federal Reserve, rose by just 1.8% in the year to January, just before the stockmarket declined. The Fed was cutting interest rates, not increasing them, even before the pandemic started.

Another difference is the scale of the authorities’ response. In America, Congress has approved $3trn of tax cuts and spending increases, while the Fed has cut interest rates to nearly zero and expanded its asset-buying programme, even agreeing to buy riskier high-yield corporate bonds. In Britain, the government is guaranteeing loans to small businesses and paying 80% of the wages of furloughed workers. These measures have buoyed market sentiment, as has evidence that the number of cases and deaths from the coronavirus may have peaked. As well as a rally in equities, the high-yield bond market has picked up (which means that borrowing costs have fallen).

Of course, the enormous support given by the authorities has been designed to offset the economic damage caused by their attempts to contain the disease. Around 30m American workers have signed up for unemployment benefits in six weeks; the previous record for a six-week stretch was just under 4m, in 1982. The European Union’s GDP fell by 3.5% in the first quarter of the year, which included only a few weeks of lockdown.

These extremes make valuations hard for investors to assess. It is as if someone tuned on a scalding hot shower and then reacted by emptying a bucket of ice over themselves. And there are few historical parallels. The outbreak of the first world war was also a genuine shock, but the authorities quickly closed stock exchanges, so it is not a useful basis for comparison. Furthermore, wars usually involve a massive increase of industrial activity, to produce armaments, rather than the current lockdown.

Emerging from hibernation
Usually, bear markets tend to be drawn out as falling asset prices interact with, and exacerbate, economic downturns. The classic example was the Depression, which was linked both to widespread banking failures and the stockmarket crash that began in 1929. The collapse of property prices and the banking sector in 2007 and 2008 led to a recession across the West.

But the “revulsion” stage of the bear-market template may be yet to occur. The authorities have stopped the rot on Wall Street, but Main Street is still suffering. Second-quarter figures may show some economies shrinking at an astonishing rate, of 20% or more. The IMF, which expects global GDP to decline by 3% this year, says that “the magnitude and speed of collapse in activity...is unlike anything experienced in our lifetimes.”

The impact on companies will inevitably be severe. S&P, a rating agency, estimates that the default rate on the riskiest European bonds will jump from 2.2% to 8% this year. Firms are slashing dividends. Royal Dutch Shell has cut its payout for the first time since the second world war. Robert Buckland of Citigroup estimates that European profits and dividends will fall by half this year. In 2019 American companies spent $729bn on buying back their own shares, an important source of support for the market. Many have suspended buybacks, including the eight banks deemed “globally systemically important” by the Basel Committee on Banking Supervision.

So although the origins of the bear market may be unusual, and the support from central banks and governments have been substantial, the same feedback process seen in other downturns could yet occur. Bad debts may rise, and investors may lose their enthusiasm for risky financial assets for an extended period.

In the wild, bears are likely to run away when they hear a lot of noise. So perhaps the authorities have done enough to scare this one off. But with most countries still in lockdown, we are unlikely to be out of the woods yet.■