Is air pollution making the coronavirus pandemic even more deadly?

In many respects, it makes perfect sense.

In many respects, it makes perfect sense.

So is dirty air, which already kills at least 7 million people a year, turbo-charging the coronavirus pandemic?

The overlap of highly polluted places, such as northern Italy, and pandemic hotspots is stark and preliminary studies point in this direction, while a link between the 2003 Sars outbreak and dirty air is already known.

Confirming the impact of air pollution on the severity of Covid-19 could make a real difference by showing the response should be boosted in places with poor air quality. But doing the scientific studies required in the midst of a global pandemic and with imperfect data is difficult.

“We don’t have the evidence linking directly to mortality yet, but we know if you are exposed to air pollution you are increasing your chances of being more severely affected,” said Dr María Neira, director of public health at the World Health Organization (WHO).

The principal risk of catching Covid-19 is contact with an infected person, and the quality of healthcare is vital in determining the outcome.

But air pollution may be important in three ways, studies show. Higher death rates due to lungs and hearts weakened by dirty air is the best understood. Pollutants also inflame lungs, potentially making catching the virus more likely and raising concern about rising pollution levels after lockdowns are lifted. Finally, particles of pollution might even help carry the virus further afield.

The studies done so far around the world are mostly “pre-prints” – they have not yet been endorsed by independent scientists through the peer-review process. This involves several experts examining the work and requiring any flaws to be addressed but approval usually takes six months to two years.

Researchers caution that plausibility is far from proof, and correlation does not necessarily mean causation, as many other factors may be important. But these initial findings do raise cause for concern – and may play a crucial role in helping us understand and combat the spread of the pandemic.

One US study, by a well-respected group at Harvard University, found that air pollution is linked to far higher Covid-19 death rates across the nation. Another, analysing European data, concluded that high levels of pollution may be “one of the most important contributors” to coronavirus deaths, while a third hinted at the link in England.

In Italy, coronavirus was detected in air pollution samples by scientists investigating if this could enable it to be carried over longer distances and increase the number of people infected, though it remains unknown if the virus remains viable on pollution particles. 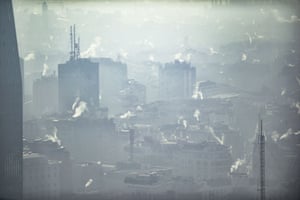 Pollution in Milan as seen from the 39th floor of Regione Lombardia. Photograph: Claudio Furlan/LaPresse via ZUMA Press/REX/Shutterstock

New work, unreported until now, has revealed strong links in China, where the pandemic began, including a study of 324 cities, which took into account other factors such as travel patterns, weather, age, poverty and smoking. It found that places with modestly higher levels of nitrogen dioxide pollution (10 micrograms per cubic metre) in the five years before the pandemic had 22% more Covid-19 cases, while higher levels of small particle pollution saw a 15% rise.

Another Chinese analysis of 120 cities now published in a journal also found a significant link, as do pre-prints linking air pollution to Covid-19 cases, death rates and the spread of disease. Elsewhere, in London, researchers identified a correlation between death rates and air pollution in different city boroughs, though confounding factors were not assessed.

Given the massive annual death toll from air pollution, researchers have also been investigating if the temporary drop in air pollution during lockdowns might have saved lives. In China, scientists said a 25% drop in city air pollution during the lockdown might have prevented between 24,000 and 36,000 early deaths over a month. Another pre-print analysis concluded that city lockdowns “brought health benefits which outnumbered the confirmed deaths due to Covid-19 in China”.

An assessment of the first two weeks of lockdown in 27 countries estimated that 7,400 premature deaths had been avoided, mostly in China and India. In Europe, the Centre for Research on Energy and Clean Air (CREA) calculated there had been 11,000 avoided deaths from air pollution, including 1,700 in the UK, in the month up to 24 April.

Lauri Myllyvirta, at CREA, said: “Air pollution levels are plummeting as an unintended result of measures against the virus; this should not be seen as a ‘silver lining’. But it does show how normalised the massive death toll from air pollution has become, and points to what can be achieved if we shift to clean energy.”

However, not all air pollution scientists agree that research should be fast-tracked while the pandemic is still raging, rather than waiting months or years to be sure of the results.

Prof Mark Goldberg, at McGill University in Canada, who has criticised the Harvard study, said: “I have nothing against the hypothesis [linking air pollution and Covid-19], it is highly plausible. But if you do a study which is filled with potential biases, you’re not doing the public any good by publishing. [Fossil fuel lobbyists] are just going to say, ‘Well, why should we believe anything you do?’”

Prof Francesca Dominici, who led the study at Harvard, disagreed: “I think the responsible reaction from a scientist is to respond to a pandemic by doing the best that you can with the data that you have. We want to provide a warning.

“The criticisms are all absolutely valid [but are] very disappointing because none of us is trying to bypass the peer review system at all. All our papers are going to be reviewed and, of course, to make new legislation, the work has to be better. We know that.”

Dominici said the general message she wanted the research to convey was that the most polluted areas are the ones where efforts should be prioritised.

“The other message is about the rolling back of regulatory standards for air pollution in the US,” she said. “There is a respiratory virus that kills people out there – this is not the right time to give permits to industry to pollute our air.” 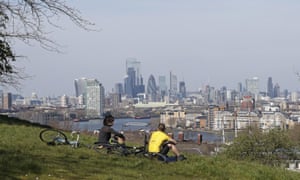 Luis Miguel Martins, at the University of Cambridge, led the analysis of England’s air pollution and Covid-19 cases, which was criticised for not taking into account other possible factors.

“Our point in publishing, soon after other studies in Italy, Germany and the US, was to say ‘look, this might be a global phenomenon and not just local’. However, we could only deal with the data we had available.”

“I still think peer-review is essential, but constructive criticism can act as an informal peer-review mechanism,” he said. “In the revised version of our work, we normalised cases or deaths by the population densities and applied a better statistical model. This validated our conclusions.”

Prof Frank Kelly, at Imperial College London, UK, said his group was not publishing preliminary analyses. “The Harvard study has been the best but there are still major issues with it.”

Air pollution research has often shown it leads to small increases in people’s individual risk of many diseases but, because entire populations are exposed to dirty air, the total increase in health damage is large.

It is not yet clear how big the impact of air pollution is on the Covid-19 pandemic. “That is a really difficult question to answer at the moment,” said Prof Anna Hansell, at the University of Leicester. “I suspect it is in line with our general observations of air pollution. But if you look across a whole population, a small increase in risk is something you might want to do something about and air pollution is a modifiable risk factor.”

Kelly is concerned about the rise in air pollution after the end of lockdowns, as is already being seen in China. “Currently, air quality in cities is pretty good because of the shutdown,” he said. Rising air pollution will increase inflammation in the lungs of some people. “If they are then exposed to a separate wave of the virus, the question is whether they will be more susceptible than the general population.”

All the researchers hope that the dangers of air pollution exposed by the coronavirus pandemic and the cleaner skies seen during the lockdowns will lead to lasting change. Some cities, such as Milan, Rome, Berlin, Brussels, Paris, Mexico City, and Oakland, California, have taken action, at least temporarily, to cut car use and increase cycling and walking. 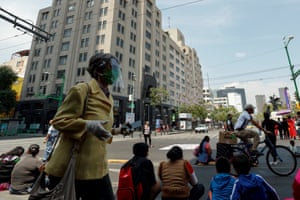 The WHO is asking people to photograph the clear skies they are seeing during lockdowns. “We can use those clean memories to inspire a more healthy and green recovery,” said Neira. But economic arguments must also be made, she said.

She highlighted the subsidies fossil fuels enjoy, the damage to people’s health from air pollution and the huge cost that adds to health services.

At some point in the future, researchers will be able to calculate how many extra Covid-19 cases and deaths were due to the world’s dirty air. “But whatever the research concludes in the end, the most important issue is that we need to make sure that after Covid-19 the recovery will be a healthy recovery, because we want to reduce vulnerability,” said Neira.

Hansell agreed: “I really hope people hang on to how life can be different and think about the lower air and noise pollution they have been enjoying.”

For Kelly, whether dirty air returns or the coronavirus crisis spurs the clean up of our towns and cities remains in the balance: “That’s the million dollar question.”

Alongside the debate on the impact of air pollution on coronavirus patients is the question of whether the virus can be transmitted through the air over significant distances. Large virus-laden droplets from infected people’s coughs and sneezes fall to the ground within a metre or two. But much smaller droplets, less than 5 microns in diameter, can remain in the air for minutes or hours and travel further.

Experts are not yet sure whether these tiny airborne droplets can cause coronavirus infections. There is evidence indicating this airborne route of infection in a poorly ventilated restaurant in Guangzhou, China.

Scientists already know Sars was spread in the outdoor air and that coronavirus can remain viable for hours in tiny droplets. These droplets have been detected in two hospitals and some public areas in Wuhan, China, and in a hospital in Nebraska, US.

Research from China and Japan shows Covid-19 infections are more likely to take place indoors. “The indoor environment is potentially much worse than outside, because the viruses and/or pollution particles can’t really escape unless you’ve got good ventilation,” said Prof Kelly.