With her husband Per Wahloo, who died in 1975, Sjöwall’s books paved the way for the likes of Henning Mankell and Stieg Larsson

Maj Sjöwall, one half of a Swedish crime-writing couple credited with inventing the “Nordic noir” genre, has died aged 84, her publisher said on Wednesday.

Sjöwall, a pioneer of gritty realism and an inspiration to modern crime writers, “passed away today after an extended period of illness,” Ann-Marie Skarp, head of publisher Piratforlaget, told AFP.

Maj Sjöwall, one half of a Swedish crime-writing couple credited with inventing the “Nordic noir” genre, has died aged 84, her publisher said on Wednesday.

Sjöwall, a pioneer of gritty realism and an inspiration to modern crime writers, “passed away today after an extended period of illness,” Ann-Marie Skarp, head of publisher Piratforlaget, told AFP.

With her partner Per Wahloo, who died in 1975, Sjöwall penned a 10-book series centred on the dour, middle-aged and decidedly unheroic Martin Beck and his team of detectives in Stockholm’s National Homicide Bureau.

“Her and Per Wahloo’s 10 novels about Martin Beck ... will become classics and have inspired, I dare say, all now living authors of crime novels,” Skarp said.

The duo penned the series decades before the likes of Henning Mankell and Stieg Larsson made the genre a worldwide hit.

“They broke with the previous trends in crime fiction,” Henning Mankell wrote in an introduction to the 2006 English edition of Roseanna. His own Inspector Kurt Wallander series would owe much to Beck three decades later.

Sjöwall was “the giant on whose shoulders the titans of modern Scandi crime fiction stand,” Britain’s Daily Telegraph wrote in 2015, in a story headlined “The couple who invented Nordic Noir”.

Both committed Marxists, they went beyond crime fiction, breaking new ground by carrying out a forensic examination of the failings of Swedish society. The themes they tackled included paedophilia, serial killers, the sex industry and suicide.

“Through the eyes of Martin Beck and his colleagues, they held a mirror up to Swedish society at a time when the ideals of the welfare state were beginning to buckle under the realities of everyday life,” Scottish crime writer Val McDermid wrote in the introduction to the 2006 edition of The Man Who Went Up In Smoke.

Born September 25, 1935 in Stockholm, Sjöwall studied journalism and graphics. She worked as a translator and art director, and as a journalist for Swedish magazines and newspapers.

It was through her work that she met Wahloo, a successful political journalist, in 1961. The two quickly became a couple and had two sons before they decided to launch the Martin Beck series. 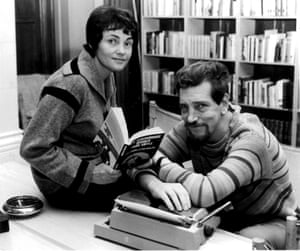 Maj Sjöwall and Per Wahloo, who alternated a chapter each while writing the Martin Beck series. Photograph: SCANPIX/Press Association Images

After dinner and having put their sons to bed, they would sit opposite each other and write through the night, a chapter each.

“We worked a lot with the style,” Sjöwall told the Guardian in 2009. “We wanted to find a style which was not personally his, or not personally mine, but a style that was good for the books.”

Before writing, the couple would carefully plan their plots, travelling, taking hundreds of photographs, meeting people and drawing maps, Sjöwall explained in a Q&A in the first Martin Beck book Roseanna.

After Wahloo’s death from cancer aged 48 – just weeks after the last book in the series, The Terrorists, was published – Sjöwall continued working as a translator.

She also collaborated on The Woman Who Resembled Greta Garbo with Dutch crime writer Tomas Ross in 1990.

The Martin Beck books have been translated into 40 languages, according to news agency TT, and served as the source material for dozens of movies.