Michael Lewis: ‘Trump is like a psycho dad to America’

Back in December, the bestselling author Michael Lewis was asked by the Observer what it would take for America to want a leader who understood the importance of scientific knowledge.

“I think a pandemic might do it.” he replied. “Something that could affect millions of people indiscriminately and from which you could not insulate yourself even if you were rich.”

Back in December, the bestselling author Michael Lewis was asked by the Observer what it would take for America to want a leader who understood the importance of scientific knowledge.

“I think a pandemic might do it.” he replied. “Something that could affect millions of people indiscriminately and from which you could not insulate yourself even if you were rich.”

Lewis has a long track record for spotting trends. He was ahead of the game in his 1989 debut book Liar’s Poker, which revealed the scandalous risk-taking practised on Wall Street. He went on to document the monomaniacal ambition of Silicon Valley (The New New Thing) and the fledgling business of sports analytics (Moneyball), but never has his cultural antenna tuned into the future with greater accuracy than that particular remark.

Now that the coronavirus is here, Lewis has further predictions. He says that financial speculators will be looking to the White House for tips to exploit the economic crisis that the pandemic has unleashed.

“Given what we know about Trump and his network of cronies,” he says, “you just wonder how many of them are out there with some advanced notice of what he’s going to say, and are taking advantage of it.”

While he may not be overly concerned with the complexities of good governance, Trump has maintained a firm focus on a much more visible, if volatile, yardstick of success: the US stock market.

On 12 February, the main US stock indexes recorded all-time highs, and the president was a happy man. Less than two weeks later, as Wall Street realised the dimensions of the approaching pandemic, there was a spectacular crash, followed by a series of further reversals. Suddenly, Trump’s chief selling point looked as vulnerable as his hairdo.

But every stock market crash is an opportunity for the canny speculator. Lewis’s bestselling book, The Big Short, later turned into an Oscar-winning film, was a classic on the subject. It told the story of the hedge fund managers and traders who bet against the market leading up to the 2007-8 financial crisis. Now, says Lewis, such people will surely be studying Trump’s Twitter account.

“There are bound to be smart hedge funds or high-frequency traders who have figured out how to time the tweets and the market reactions. Trump has the ability to move sectors up and down by recommending a drug or saying that he’s solved the problem between the Saudis and the Russians, and the oil market’s going to recover.

“I keep waiting for the story that they found the guy or guys who are doing this,” he says.

For all Trump’s many missteps, the political impact of Covid-19 remains far from certain. The US leads the world with over a million cases and more than 60,000 deaths. But has it awoken the American public to their president’s methodical shortcomings? Or has it simply reinforced the ideological sectarianism that is a feature of a deeply divided country?

Liberal critics have come to realise that challenging Trump often serves only to rally his supporters. But, in recent weeks, tactical circumspection has been completely abandoned. In a piece in the latest issue of The Atlantic, entitled We Are Living in a Failed State, the respected commentator George Packer writes: “The crisis demanded a response that was swift, rational and collective. The United States reacted instead like Pakistan or Belarus — like a country with shoddy infrastructure and a dysfunctional government whose leaders were too corrupt or stupid to head off mass suffering.” 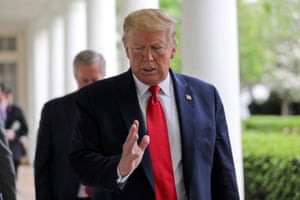 ‘I think Trump’s figuring out in his reptilian brain that he actually has to solve a problem.’ Photograph: Carlos Barría/Reuters

The nature of that shoddiness and dysfunction was the issue that Lewis explored in The Fifth Risk, his coruscating exposé of the depletion of US government agencies by the Trump administration. The book, published in 2018, sought to educate Americans in the many vital roles the much-pilloried federal bureaucracy performs – from maintaining nuclear waste to assembling the data for weather forecasts.

Nowhere was ignorance of these responsibilities quite as glaring as within the Trump camp when it walked into the White House. The presidential team had next to no interest in studying the outgoing Obama administration’s painstaking transition documents.

And ever since, Trump has displayed a barely concealed indifference to the government he is supposed to lead, either leaving key posts vacant or appointing ill-suited hangers-on or business people with obvious conflicts of interest to head up different departments, agencies and regulatory bodies.

It’s a laissez-faire attitude that has left him ill-prepared to mobilise a coordinated national response to Covid-19. Lewis rates Trump’s performance at the outset of the pandemic as “appallingly bad”, not least because he had already dismantled a programme called Predict that was designed to anticipate the movement of viruses around the world.

“But the big thing he did,” Lewis adds, “was to remove the pandemic response team from the White House. So he cost us time in the beginning, and time is lives. He cost us much more time than an ordinarily inept man would’ve cost us because, in addition to being inept, he dug his heels in and pretended for weeks that he wasn’t inept. And those weeks were expensive.”

Trump’s downplaying or outright denial of the Covid-19 threat is well-documented. From mid-January to mid-March, he seemed to view it as something that could be talked away, as though it would disappear through the sheer force of his bluster. Since then he has been forced by events to change tack. The strategic line, though, has been rather muddled: one moment he emphasises the need to support the lockdown, the next he encourages protesters to reject individual state restrictions.

“He should be speaking for the whole country and he’s not,” says Lewis, “but having said that, he hasn’t been as hostile to science as he might have been.”

By this, Lewis means that Trump has largely stood by Anthony Fauci, the key member of the White House coronavirus task force, whom Lewis calls “the most popular man in America”. The celebrated immunologist has certainly spearheaded a much-needed revival of expertise, but nonetheless Trump’s newfound support for science is not an obvious improvement on his previous hostility. After all, the cause of empirical research was hardly advanced by his suggestion that injecting disinfectant could be the answer to the pathogen.

Lewis concedes the point, yet sees signs that Trump, or those around him, are trying to scramble together a functioning operation to deal with the pandemic, if only because there is now no alternative.

“It’s interesting to watch,” Lewis says, “because I think he’s figuring out in his reptilian brain that he actually has to solve a problem, rather than just let it all happen and then make up a story after the fact.”

The problem for Trump, whose speciality is presidential edict by tweet, is that he’s never had much respect for policy and planning. The degradation of federal planning and infrastructure is not a new development. It extends back to Ronald Reagan’s day, but Trump has rapidly accelerated the process. He is, says Lewis, “the last station on the Reagan Express”.

An illustrative example of his approach to government was his appointment of Rick Perry as the head of Department of Energy – a huge bureaucracy that, among other things, is responsible for nuclear weapons and waste. Perry’s main claim to relevance was that, as an unimpressive presidential candidate, he promised to close down the Department of Energy, without actually knowing what it did.

Trump also unsuccessfully sought to install Barry Myers, CEO of AccuWeather, as head of the National Oceanic and Atmospheric Administration, which oversees the National Weather Service (NWS). At AccuWeather, which his family owns, Myers had lobbied to undermine the NWS.

“I don’t think it’s quite as cynical as Trump auctioning off the government to business interests,” cautions Lewis. “It‘s more that he had no interest whatsoever himself, paid no attention to it, and so he had no positive motivation to put the right people into the various positions. Who then comes rushing in? The people who have a financial interest.”

The US reacted [to the pandemic] like a country whose leaders were too corrupt or stupid to head off mass suffering. Michael Lewis

Such behaviour has led Lewis to conclude that Trump never expected to become president. The campaign was just a brand-building exercise. “He’s the dog who caught the car,” he says. But if that were the case, wouldn’t he welcome the release of electoral defeat in November?

What’s clear is that Trump has confounded, not to say dumbfounded, many experienced observers. At the outset, the received wisdom was that the established processes of the American political system, and the sheer weight of responsibility, would force the maverick to conform to presidential expectations.

Not only has that not proven the case, but Trump has redefined the whole concept of presidential politics. The fact that no one knows what he’s going to do next, least of all his advisers, has become the means by which the White House operates.

“The model I have in my head right now for our society is the model of a family with kind of a psycho, alcoholic dad,” says Lewis. “It is the story of how the country compensated for its president, which is a really bizarre story to tell about an American crisis. If you go back in history, it’s usually a president who in some ways leads the response. In this case, he is being dragged along.”

But being forced in the direction he never wanted to go is not a role that a man of Trump’s outsized ego will readily accept. He knows that if he is to avoid being the Neville Chamberlain of the pandemic, he has to wrest control of the narrative.

To that end, he has directed fire at China (which does, indeed, have questions to answer) and dog-whistled the growing libertarian revolt. Ultimately, however, he will be judged on the numbers. Not of his favoured Dow Jones index – though that doesn’t look great at the moment – but of the death count of Americans.

As Lewis puts it: “If this pandemic does not wake Americans up to the importance of good government, then nothing will.”

Michael Lewis is the author of The Fifth Risk, published by Penguin. The new season of his Against the Rules podcast show launches on 5 May