While most cruise ship passengers have now made it back to land, another crisis has been growing – with no safe haven in sight.

Around the world, more than 100,000 crew workers are still trapped on cruise ships, at least 50 of which have Covid-19 infections, a Guardian investigation has found. They are shut out of ports and banned from air travel that would allow them to return to their homes.

While most cruise ship passengers have now made it back to land, another crisis has been growing – with no safe haven in sight.

Around the world, more than 100,000 crew workers are still trapped on cruise ships, at least 50 of which have Covid-19 infections, a Guardian investigation has found. They are shut out of ports and banned from air travel that would allow them to return to their homes.

Many of these crew are quarantined in tiny cabins, and some have had their pay cut off. They have effectively become a nation of floating castaways, marooned on boats from the Galapagos Islands to the port of Dubai.

Many of the crew have only minimal communication with the outside world, making their situations hard to scrutinise. But at least 17 cruise ship workers are confirmed to have died from suspected Covid-19, and dozens more have had to be medically evacuated off ships and hospitalised, the Guardian found.

“We all have family, we all want to go home,” said one crew member who has been social distancing in his cabin aboard the MSC Seaview off the coast of South America for nearly a month, but is no longer being paid.

We all have family, we all want to go home Crew member, MSC Seaview

The worker, who spoke via an internet message and asked not to be named for fear of losing his job, said crew were initially allowed to move about the ship freely, but have been told to remain in their cabins since a worker who had already left the ship tested positive for Covid-19.

“We have not received any information about when we’re going home or what they are doing to get crew members home,” said the worker. “We are just in the cabin like prisoners.”

A spokesperson for MSC cruises said: “MSC Cruises has taken the difficult decision to temporarily suspend its cruise ship operations. As this health crisis has caused all our ships globally to stop operating, we have temporarily agreed to relieve the majority of our crew from their duties and are working to identify and pay for flight tickets for each and every one to safely return home for the duration of the temporary suspension of ships’ operations.

We are offering all those who remain on board full board and lodging free of charge, assigning each of them a guest cabin for individual use. We’ve upgraded our menus, and are providing complimentary internet.”

Most industry workers hail from developing countries such as the Philippines, Indonesia and India and generally earn between $1,000–$2,000 (£810- £1,620) a month for working seven days a week, according to Ross Klein, a professor at St John’s College in Newfoundland who has written four books on the cruise industry.

Documents seen by the Guardian show that at least one cruise line has stopped paying some workers who are trapped aboard.

Those who died in April include two housekeeping staff, a bartender and a security guard who were evacuated from ships in Florida. An Italian ship’s doctor died in Brazil after being taken by ambulance from the Costa Fascinosa cruise liner, and an engine worker on the Antarctic explorer Greg Mortimer died in Uruguay after 128 of the 217 people aboard tested positive for coronavirus.

Yet many nations, including the US, have baulked at providing even basic emergency services for these stranded crew members.

“Some of these crews are in a no man’s land,” said maritime attorney John Hickey. He said crew members don’t have access to the rights afforded by their nations of citizenship, yet they are often outside the jurisdiction of the countries where their ships are sailing.

Most of the cruise companies are registered in low-tax, low-regulation nations such as Panama or Liberia, with their ships flying the flags of territories such as the Bahamas or Bermuda, which are not prepared to care for thousands of sick crew.

A ship flying a flag of convenience means the owner has registered the vessel in a country other than their own. The ship flies the ensign or flag of that country, known as the flag state and operates under its laws, typically laxer than the owner’s own.

For a ship owner, the advantage of this arrangement includes comparatively fewer regulations, lower employment requirements, and thus cheaper labour, cheaper registration fees and lower or no taxes.

For crew members, the disadvantages tend towards lower working standards, fewer rights and little protection. They are opposed by the International Transport Workers' Federation.

Panama, which has the largest ship registry globally, followed by Liberia, operates an “open registry”, allowing foreign owners to register ships under its flag. It guarantees anonymity to the owners, making it difficult for them to be held to account.

The practice began in the 1920s in the US, when owners of cruise ships registered their vessels in Panama so that they could serve their passengers alcohol during Prohibition.

“It’s a big problem,” he said. “We are getting calls left and right. Crews are onboard, they’re not happy and they’re frightened.”

As of 4 April, the US coast guard estimated that 93,000 crew members remained aboard ships in and around US waters alone. Tens of thousands more are on ships in other parts of the world, according to the Guardian’s analysis, which used the ship tracking site CruiseMapper and media reports to identify more than 50 ships that have had Covid-19 infections or confirmed exposures aboard.

Cruises around the world were suspended on 14 March, yet many ports closed their doors long before that, meaning some crews have been stuck at sea for months. 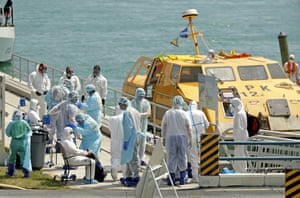 Healthcare workers attend to a crew member showing Covid-19 symptoms after arriving from a cruise ship off the coast of Miami. Photograph: David Santiago/AP

Cruise industry officials say they have been scrambling to repatriate crews that are not needed aboard during the pause, but port closures, travel bans and flight restrictions have made it extremely difficult. Some countries, including India, have almost completely sealed their borders, even to citizens.

“The industry is committed to bringing passengers and crew home at its expense – without burdening governments,” the Cruise Line Industry Association said in a statement to the Guardian.

“Flight restrictions and port closures have created some logistical challenges; however we are working through those as we speak. We are asking ports and governments around the world to allow these ships to come into port so that those onboard can make their way home safely and as quickly as possible.”

We are asking governments around the world to allow these ships to come into port Spokesperson, Cruise Line Industry Association

Thousands of crew are sick or have been exposed to coronavirus. Outbreaks are raging in US waters, from the Miami coastline, where at least nine workers have been evacuated from the Royal Caribbean Oasis of the Seas, to the docks of San Diego, where workers aboard the Disney Wonder have contracted coronavirus.

In France, workers preparing to launch the brand new Celebrity Apex contracted Covid-19 even before the ship carried its first passengers.

Some ships have medical supplies but few are equipped to handle full-blown outbreaks. All crew on the MSC Seaview are obliged to wear a mask and gloves onboard the cruise liner, which has basic medical equipment, a small emergency room and a laboratory. At least two doctors are caring for people on the vessel.

“All crew members currently on board are healthy and none have displayed any symptoms,” a spokesperson for MSC cruises said. “MSC Seaview has a full on board medical centre equipped and staffed in line with the highest and most stringent international guidelines. We continue to conduct regular health and temperature checks to ensure their health.”

The hundreds of crew members aboard the Ruby Princess ship, which departed from Australia on Thursday, marked their 30th day in quarantine on the ship on last week with a video thanking the medical workers who have cared for them.

But the ships generally lack ventilators and other complicated medical equipment needed to treat Covid-19. In serious medical emergencies, passengers and crew on cruise ships are normally evacuated to a hospital on dry land for further care. During the pandemic, however, many countries are refusing to take them.