Pandemic brings Trump's war on science to the boil – but who will win?

Three years of hostility to evidence-based policy have led to a crisis in which the president’s ill-informed, self-serving ‘hunches’ have deadly consequences

The look on her face will be remembered as one of the defining images of the coronavirus crisis. As Dr Deborah Birx, coordinator of the White House response to the pandemic, sat listening to Donald Trump musing about disinfectant as a treatment for Covid-19, her eyes blinked, her mouth tightened, and she appeared to be in pain.

As a cellular immunologist, Birx’s anguish was all too understandable. But she is not only a scientist, she is a diplomat, and since Trump made his contentious remarks last week she has declined to criticize his flight of fancy.

The look on her face will be remembered as one of the defining images of the coronavirus crisis. As Dr Deborah Birx, coordinator of the White House response to the pandemic, sat listening to Donald Trump musing about disinfectant as a treatment for Covid-19, her eyes blinked, her mouth tightened, and she appeared to be in pain.

As a cellular immunologist, Birx’s anguish was all too understandable. But she is not only a scientist, she is a diplomat, and since Trump made his contentious remarks last week she has declined to criticize his flight of fancy.

Other leading scientists have felt less obliged to be circumspect. “Trump’s constant antics are a danger to the American people,” said John Holdren, a Harvard environmental scientist who was Barack Obama’s White House science adviser through both his presidential terms.

Holdren told the Guardian the current approach to science and expertise within the Trump administration is a “shame on many levels. Trump’s talking nonsense risks misleading the public, and it distracts top scientists who spend emotional energy neutralizing the damage he causes when they should be tackling the virus.”

Three months into the pandemic, with the number of confirmed cases passing 1 million, the tension that has been simmering for months between Trump and the scientific world is at boiling point. His improvisation about injecting disinfectant encapsulated the sense of demoralization – of despair, almost – that many American scientists now feel about the drift from evidence-based leadership. 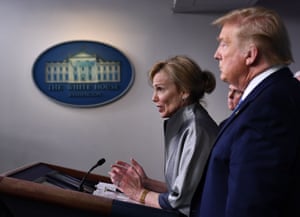 “They are doing everything they can to undermine science at a time when it is critically important, as are facts. We have come to an extreme level,” said Gina McCarthy, who led the US Environmental Protection Agency (EPA) until Trump’s accession in 2017.

Science is so assailed at present that the situation raises a startling question: are we losing the fight for reason in the pandemic? McCarthy, who now heads the Natural Resources Defense Council (NRDC), said she frets America may prove incapable of withstanding the anti-science assault unleashed by Trump.

“I have been worried that people wouldn’t notice the attack happening. These things are difficult to explain – they are not soundbites – and our country has for a long time taken for granted the fact that we make science-based decisions. That is simply not true any more.”

Science has played no role in virtually all the top appointments Trump has made.

The accusation that in three short years Trump has succeeded in severing historic ties between the US government and science-based decision making is one of the more chilling charges leveled at his presidency. Science has after all been at the core of the American experiment, ever since Franklin Roosevelt created the White House Office of Scientific R&D in 1941.

Not only was scientific endeavor instrumental in winning the second world war – through the atomic bomb and innovations such as radar and communications technology – it was also central to America’s postwar economic success. In recent times, Obama inherited that legacy and ran with it, promising on his first day in office in 2009 that “we will restore science to its rightful place”.

In his first set of presidential appointments, Obama brought into his administration five science Nobel prizewinners and 25 members of the National Academies of Science, Engineering and Medicine. They became known as the “dream team”.

By contrast, Holdren said, “Trump is the exact opposite. Science has played no role in virtually all the top appointments he has made.”

The roll call of officials Trump has entrusted with protecting Americans from Covid-19 tells its own story. With no Nobel laureates in sight, Trump relied initially on Alex Azar, secretary of the Department of Health and Human Services (HHS), who is a lawyer and former drug company boss; followed by Mike Pence, a career politician and evangelical Christian; and most recently Jared Kushner, the president’s son-in-law, whose expertise lies in real estate.

Trump’s top team have in turn promoted individuals in their own mold. As Reuters has reported, Azar gave the job of coordinating the fight against coronavirus within HHS, to an individual whose job immediately before joining the Trump administration was as a dog breeder running a small business called Dallas Labradoodles. 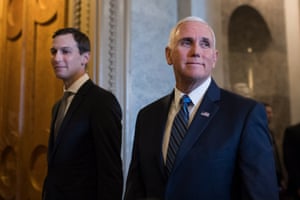 The clash between science and the White House is the culmination of a long confrontation. As Jeffrey Sachs, a globally renowned economist at Columbia University, told the Guardian: “The Republican party has been on an aggressive anti-science campaign for decades, mainly because scientists are in favor of environmental regulations while the Republicans are the party of polluters.”

In Trump Republicans have found a leader who regards his own innate abilities to divine the truth as superior to evidence-based science. In one of the most telling moments of his daily White House coronavirus briefings, Trump was asked what metrics he would use to decide when Americans could emerge from lockdown.

He raised his right hand, placed his index finger against his temple, and said: “The metrics right here. That’s my metrics.”

That faith in his own instincts over and above fact has been a characteristic for years. Trump is famous for believing that exercise is misguided, because people are born with a finite amount of energy in them, like batteries.

Until he entered presidential politics he was opposed to vaccinating children, claiming falsely that vaccines cause autism.

Given these tendencies, when Trump snatched unexpected victory in 2016 the scientific community braced itself for what they knew would be an uncomfortable ride.

The attack began in the very first week of Trump’s presidency. Scientists, including public health experts, were barred from communicating with the public about their work and new restrictions were imposed on the EPA.

Since then the Union of Concerned Scientists has recorded no fewer than 139 major attacks from the Trump administration on scientific integrity. For the Union’s Michael Halpern, the mindset was summed up by Sharpiegate in September 2019 when the White House redrew the path of Hurricane Dorian to include Alabama so that the president would not have to admit he made a mistake.

To the shock and dismay of the science community, the national weather agency was forced to play along.

“Sharpiegate was the harbinger of what’s happened with the pandemic,” Halpern said. 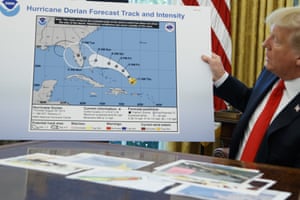 Donald Trump holds a chart in which the projected path of Hurricane Dorian appears to have been extended in makeshift fashion to include Alabama by means of a Sharpie pen. Photograph: Evan Vucci/AP

When the nation is dealing with a hurricane that threatens the lives of thousands it is serious enough, but a pandemic threatening millions of Americans is on another level. The sidelining of expert advice that has been a trademark of this presidency has burst into full view, with Trump’s belief in his own intellectual prejudices pitted directly – often in front of TV cameras – against the evidence-based advice of his own bewildered officials.

“Many scientists were dreading that the president would be faced by a test just like coronavirus,” Halpern said. “It has had immediate and catastrophic consequences.”

All the major mistakes that have been made by the Trump administration in handling the pandemic can be ascribed to this failure to listen to, and trust, scientific advice. Trump was slow to mobilise the federal government because he failed to heed scientific warnings; instead he chose to follow his “hunch” that a “miracle” would happen and the virus would disappear.

His obsession with the anti-malarial drug chloroquine as a potential “game changer” in treating Covid-19 caused havoc in the US and around the world, with recent studies suggesting the drug has no beneficial qualities and plenty of side-effects.

In contrast to other countries like South Korea where public health agencies have spearheaded successful efforts to contain Covid-19, in the US the Centers for Disease Control and Prevention (CDC) has been sidelined. Its last press conference was in March.

The assault on science does not end with the White House. Trump’s vocal disdain for evidence-based thinking has emboldened an army of quacks, pseudoscience groups and conspiracy theorists who have stepped up their proselytizing online and in protests across the country.

The president’s remarks about injecting disinfectant not only led to some people poisoning themselves by drinking cleaning fluid, it also encouraged peddlers of industrial bleach to reinforce their claims that they had a “miracle cure” for coronavirus.

Del Bigtree, a leading anti-vaxxer who produced the film Vaxxed based on the views of the disgraced British former physician Andrew Wakefield, told the Guardian that viewership of his online show the HighWire has increased “exponentially” during the pandemic. 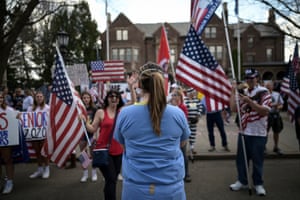 A registered nurse stands in front of protestors rallying outside of the Minnesota governor’s mansion to demand an end to the coronavirus lockdown. Photograph: Aaron Lavinsky/Star Tribune via Getty Images

If there is a silver lining in the current browbeaten state of American science, it lies paradoxically in the pandemic itself. The crisis has not only brought the confrontation to a head, it also offers a possible way out of it.

All the scientists consulted by the Guardian agreed that the cause of evidence-based leadership would emerge from the current crisis stronger.

Naomi Oreskes, an historian of science at Harvard, pointed out that Americans remain generally favorable to the scientific mission. A recent Pew survey found that 73% of Americans thought that science had a positive impact on society.

“The impression that anti-science sentiment is on the rise is false – it’s what the merchants of doubt try to stoke because they want us to think that, to distrust science,” Oreskes said.

McCarthy believes that Covid-19 has handed science an unexpected gift. “People are beginning to see the costs when you don’t tell the truth and you sideline those who do.”

McCarthy predicts that a final collision is coming between the merchants of untruths led by Trump and a majority of the American people demanding real facts and real science.

“It will be the people against polluters, experts against those winging it, scientists against the peddlers of misinformation. The question is, who is going to win?”