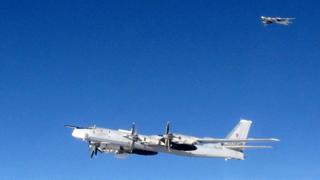 The chief of Britain's air force has condemned its Russian counterpart after two of its maritime patrol bombers were intercepted north-east of Scotland.

RAF Typhoon fighters were deployed from the Lossiemouth base in Moray as the Russian Tu-142 "Bear-F" aircraft approached on Wednesday.

The Russian aircraft stayed in international airspace over the Norwegian Sea and the North Sea.

However, the RAF said they were flying within the UK's "area of interest".

Norwegian F-16s and F-35 jets, and a NATO E-3A were also deployed to monitor the Russian planes, which were regarded as unidentified as they had not made radio contact with civilian or military Air Traffic Control, or filed a flight plan.

"These Russian bombers are relics of the Cold War, do not comply with international air traffic regulations and are a hazard to civilian and military aircraft," he said.