Show your mettle: Victoria Cross not made of captured Russian guns after all

The long-held belief about the UK’s highest award for valour may have originated in speculation by the press, research has found

The Victoria Cross, or VC as it is popularly known, is the most cherished award in the British armed forces, awarded since 1857 for courage displayed “in the presence of the enemy”.

Its long history is filled with true stories of great bravery. But one long-held belief – that Victoria Cross medals were made from enemy guns captured during the Crimean war against Russia – is unlikely to be true, and originated instead from speculation in the press, according to new research.

The Victoria Cross, or VC as it is popularly known, is the most cherished award in the British armed forces, awarded since 1857 for courage displayed “in the presence of the enemy”.

Its long history is filled with true stories of great bravery. But one long-held belief – that Victoria Cross medals were made from enemy guns captured during the Crimean war against Russia – is unlikely to be true, and originated instead from speculation in the press, according to new research.

Instituted by Queen Victoria, the Victoria Cross is Britain’s highest award for valour in war and has been awarded 1,358 times.

Dr Andrew Marriott, a retired lieutenant colonel and visiting researcher at Newcastle University, has concluded that it is “highly implausible” that the medals came from Russian guns after the victory at the siege of Sevastapol in 1855. His research led him to a newspaper report at the time, asserting that they did come from the captured guns. He also found a letter in the Times from a Crimean veteran suggesting the same thing, and so, he says, the myth was born.

Using x-ray fluorescence scans to examine the composition of Victoria Cross medals from 1856 to 2013, the research showed that part-way through the first world war, and again during the second world war, there were noticeable changes in composition, when compared with the 19th-century medals.

“Although we know that Queen Victoria decreed that the new honour be cast from bronze, there is no evidence to suggest that she wanted captured weapons from Sevastopol to be used for this purpose,” Marriott said.

“Like many at the time, the Queen saw little to celebrate from the victory at Sevastopol, and had displayed little interest in the captured Russian ordnance. The only contemporary record of a Sevastopol connection is a newspaper report of the medal ceremony in Hyde Park in 1857. The correspondent most likely conflated various stories circulating about the redistribution and recycling of captured Crimean guns.”

The 64-year-old, who spent 30 years in the Royal Regiment of Fusiliers, explained that Hancocks Jewellers in London has been the sole producer of the medal since its inception. 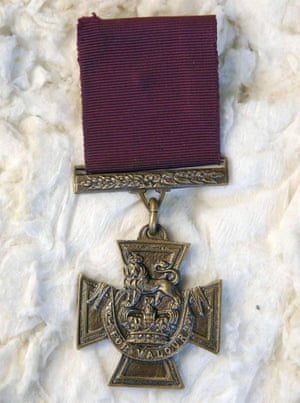 But during the first world war, Hancocks was forced to ask the War Office for a resupply of metal and, believing the myth that had been created, they turned to captured guns.

Marriott said: “Hancocks were running out of metal so asked the War Office for a resupply and it’s probable that staff in the War Office, who were probably thinking about other things than the Victoria Cross, looked at each other and asked, where do you get this metal from? By then there would have been a tradition about Sevastopol guns, so a delegation would have been sent to cut off bits of guns to supply to Hancocks.”

The current source of Victoria Cross metal is thought to be a cascabel – the round protrusion at the back of a cannon – stored at a Ministry of Defence depot in Donnington, Shropshire. Published in Post-Medieval Archaeology, the research found historical evidence that this cascabel may have been taken from a gun captured during the second Anglo-Chinese war of 1860, three years after the first Victoria Cross awards were made.

“While it’s unlikely that even the earliest medals came from the ordnance captured at Sevastopol, it is clear that most of the VCs awarded since the first world war have plausibly been sourced from the cascabels of captured guns – an important and symbolic fact for those who have received the honour in recognition of their bravery,” Marriott said.

The medal was awarded to 627 recipients in the first world war and to 181 in the second world war. The most recent person to receive it was Joshua Leakey from the Parachute Regiment for his involvement in a raid in Helmand Province, Afghanistan.

Notable recipients of the Victoria Cross

• Jack Cornwell was posthumously awarded the VC after he died aged 16 following the Battle of Jutland in the first world war.

• Sir Philip Neame, who was awarded a Victoria Cross during fighting in France in the first world war, would go on to win an Olympic gold medal in the Running Deer competition before serving again in the second world war.

• Andrew Fitzgibbon was an Irish soldier and thought to be the youngest recipient after being awarded it aged 15 during the third China war in 1860.

• Captain Noel Godfrey Chavasse was the only double recipient from the first world war after rescuing men in no-man’s land during the Battle of Guillemont and then again in the offensive at Passchendaele.