'The situation is critical': coronavirus crisis agony of Spain's poor

Paloma Pérez, a smoker who has dealt with pancreatitis and cancer, has more reason than many to fear the coronavirus as she waits out the lockdown in her house in the mountains outside Madrid.

To limit her exposure, the 74-year-old has told the home help who used to pop in twice a week to stop coming, and her main meal of the day – usually fish or meat, but with a decent variety of sides – is left outside her closed front door by the Catholic charity Cáritas.

Paloma Pérez, a smoker who has dealt with pancreatitis and cancer, has more reason than many to fear the coronavirus as she waits out the lockdown in her house in the mountains outside Madrid.

To limit her exposure, the 74-year-old has told the home help who used to pop in twice a week to stop coming, and her main meal of the day – usually fish or meat, but with a decent variety of sides – is left outside her closed front door by the Catholic charity Cáritas.

The nightmares Pérez suffered when the pandemic began have receded and she is adapting to the enduring lockdown with far fewer problems than many people in Spain.

“I’m single, my relatives are quite far away and I was an only child, so I’m quite used to being on my own,” says Pérez. “I was always alone, playing on my own or living alone, so maybe that means I’m better prepared for this.”

Cáritas has reported a surge in pleas for help since Spain went into national lockdown on 14 March. It says demand in the Madrid region has tripled over the past few weeks and 85% of the requests it receives are for food, medicine, or assistance in covering basic living costs. 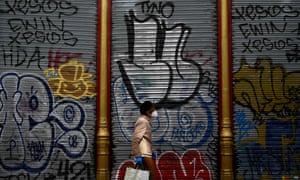 It is one of the non-governmental organisations (NGOs) striving to mitigate the socio-economic effects of the pandemic amid warnings that the poorest and most marginalised members of society will be the hardest hit by the virus in a country that has not yet fully recovered from the 2008 economic crisis.

Spain’s Socialist-led coalition government has announced a four-phase transition towards some kind of return to normality, and launched what it calls “the greatest mobilisation of resources in Spain’s entire democratic history” to help the country weather the pandemic.

It has promised a €200bn relief package, including a moratorium on mortgage payments and utility bills, an easing of social security contributions, and a €440 payment to temporary workers whose contracts have been ended.

Despite those initiatives, the economic damage caused by Covid-19 is becoming increasingly visible. In the first quarter of 2020, the Spanish economy shrank by a record 5.2%. The country’s GDP is forecast to drop by 9.2% this year, while unemployment is expected to rise from 14.4% to 19%.

“Things here really aren’t that great at the moment, especially for families that were in a vulnerable situation before this hit,” says María Blanc, a spokeswoman for Cáritas. 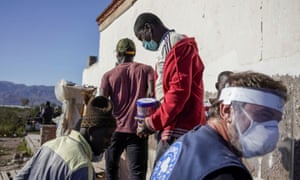 “All the job losses and temporary layoffs we’re seeing have left some people without food. Lots of people were in jobs that only covered their day-to-day needs and so they never had a cushion or any savings.”

According to Cáritas, 40% of those seeking its help are doing so for the first time – or are returning after a period of relative self-sufficiency. The cooks, cleaners, carers, drivers and waiters who have managed to make ends meet over recent years can no longer support themselves or their families. And those who could once rely on a good summer season to see them through a whole year are growing desperate as the shutdown continues.

“No one’s ever been through this before,” says Blanc. “We just don’t know how long it’s going to last.”

The Spanish Red Cross, meanwhile, plans to spend €11m on helping more than 1.3 million people during an initial two-month operation that will directly assist vulnerable members of society, such as homeless, unemployed or disabled people, and victims of domestic violence. Much of its response is built on the lessons learned from the 2008 crash.

As well as helping to relieve some of the pressure on Spain’s overstretched health system, it is also providing food and medicine to those who can no longer afford them.

But, as Moisés Benítez, a national manager for the Spanish Red Cross, points out, this current crisis is unprecedented.

“When you have a flood, you work out who the most affected people are: who’s lost their home; who’s lost their crops,” he says. “But this is a very particular kind of emergency because it has affected the entire population. And we’re seeing a surge in the number of people who are vulnerable because of the lockdown.”

The NGO is feeding destitute migrants in slum encampments at the same time as supplying thousands of tablets to poorer families so that children can keep up with their schooling.

“The hardest thing has been finding ourselves in a crisis that is universal, and which affects everyone,” says Benítez.

“We knew who some of the people who would need help were, but we’ve also had to innovate as we came across new groups. The 2008 crisis discriminated between rich and poor – this one doesn’t.”

While it may be an egalitarian blight, Covid-19 is already being felt most keenly by the most marginalised of the marginalised – including sex workers and victims of trafficking. 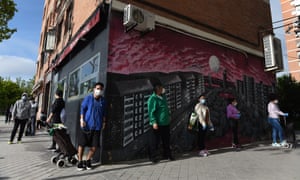 People queueing for food aid in Madrid on 2 May. Photograph: Denis Doyle/Getty Images

“Some of our colleagues are in a horrific situation right now; some don’t have money to buy food for their kids, let alone pay the rent,” says María José Barrera, a spokeswoman for the Prostitutes’ Collective of Seville.

“A lot of our colleagues are undocumented immigrants who have symptoms of the coronavirus but who are too scared to go to the doctor because they’re worried about being reported to the authorities.”

Prostitution was decriminalised in Spain in 1995 and the sector is now thought to employ about 300,000 people.

Idoia Ugarte, a lecturer in nursing who works with Doctors of the World in Castilla-La Mancha, the Spanish region with the most brothels, offers a similar assessment.

Since the national state of emergency was declared, the NGO has been keeping in touch with sex workers by phone. While the women say the number of men seeking sex has fallen since the lockdown kicked in, demand has not disappeared.

The problem is that many women are already so indebted to pimps, traffickers, or the brothels and clubs where they live and work, that they have no choice but to risk their health by continuing to have sex for money, even as the virus spreads.

“The situation is fairly critical because if they get into more debt, the only way they have to pay it off is through prostitution,” she says. “They’re having to run a terrible risk.”

Ugarte and her colleagues welcome the government’s recent announcement that sex workers and victims of trafficking and sexual exploitation will be offered support, emergency accommodation and access to the new benefit to be known as the minimum vital income while the crisis lasts.

But they worry that the services will be hard for many affected women to access and could end up being little more than a sticking plaster. The longer the pandemic continues, Ugharte adds, the greater the physical and mental toll it will take.

“These women are in a precarious state in every way,” she says. “Emotionally and psychologically, they’ve suffered collateral damage from working in prostitution. But now they need money – and not just for themselves. A lot of the women send it back to their families in their home countries, and those families are also in a crisis situation because of the pandemic. At the moment, these women just can’t see any way out of this.”

If the coronavirus’s physical symptoms include fever and a cough, its defining psychological legacy is the sense of uncertainty and powerlessness that mingles with the fear and the boredom.

“Every time you turn on the TV, you hear about all the people who are dying and there’s nothing you can do,” says Paloma Pérez as she prepares to eat her latest doorstep lunch. “Things seem to be getting a bit better, but it’s always hanging over you and we know there’s an economic crisis on the way. Things are pretty bleak now.”