'You think we care about masks?': anger and poverty grip Lebanese city

Tripoli, a hub of peaceful protest last October, is at the centre of a struggle to survive amid coranavirus

In the heart of the city that used to drive Lebanon’s economy, workers were busy with a rare jolt of enterprise, bolting steel plates to the ruins of its scorched banks.

By dusk on Thursday, all of Tripoli’s ransacked branches were encased in armour, shielding piles of smouldering ash and rubble, but coming far too late to protect what had been inside. Over two earlier, violent nights, rioters had looted what they could.

In the heart of the city that used to drive Lebanon’s economy, workers were busy with a rare jolt of enterprise, bolting steel plates to the ruins of its scorched banks.

By dusk on Thursday, all of Tripoli’s ransacked branches were encased in armour, shielding piles of smouldering ash and rubble, but coming far too late to protect what had been inside. Over two earlier, violent nights, rioters had looted what they could.

Six months after a revolution demanding action from a corrupt ruling class, and with a global pandemic now thrown in, its people are returning to the streets in rage at an enfeebled state that has largely left them to fend for themselves as the middle class sinks into poverty. Tripoli, a hub of a nationwide peaceful uprising last October that electrified the country, is now at the centre of something more raw and desperate – an increasing struggle to survive. 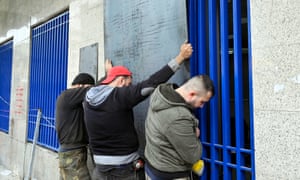 Workers install barriers on the facade of a bank in Tripoli. Photograph: Wael Hamzeh/EPA

The extent of the economic predicament has been laid bare in unusually transparent financial statements that have cast new light on Lebanon’s political structures and left many pondering the viability of a state that has withstood decades of war, occupation and chaos, but now appears adrift.

“We have been executing something like this for 20 years, but not as bad as what we’re living,” said Fida Jundi Hajjeh, the manager of a Tripoli-based NGO, Sanabel Nour, which provides food and other aid to orphans and the impoverished. “The middle class has been demolished. In Tripoli, we’re all from the low socio-economic classes these days.”

“As much as we can give is not enough,” she said as small crowds waited silently outside her office for food coupons. “The needs are so great that we sometimes feel we are not doing anything. There are so many employees who have stopped working.”

Tripoli during daylight hours in Ramadan is usually subdued, but with the coronavirus closing shops and cafes and most arms of government shut down, its streets are sullen and still. That changes as night draws near, bringing with it the bustle of a normal day. There is no social distancin, and very few face masks to shield people from the virus.

“You think we care about that when people can’t feed themselves?” asked Linda Borghol, as she stirred a large vat in a makeshift food kitchen. “Nobody has anything in Tripoli. Nobody can send money. Even if you can send, it’s not easy to collect it. People are literally starving.”

Her NGO provides up to 5,000 people each day with basic sustenance, just as she has since the start of the October revolution. It was easier then, she says, as food was readily sourced, as were donations.

But in the last month, the Lebanese currency – pegged to the US dollar since the end of the civil war 30 years ago – has collapsed. On Friday, it was trading at 4,000 lira to $1, after drifting steadily from its official rate of 1,500 lira.

An economic package announced by the prime minister, Hassan Diab, on Thursday night fixed a new rate of 3,500 lira for the next 18 months, a move that would formalise at least a 50% price hike for nearly all goods and services, and set in stone prices that many Lebanese have no means to afford.

Lebanon is a consumption economy that imports nearly everything and does not produce enough basic food supplies to sustain its population. The increased cost of imports has been quickly passed on. A freeze on many salaries, controls on bank withdrawals and slashed spending on social services, have also ravaged household incomes.

The Lebanese government estimates that 75% of the population are now in need of aid, including food aid. Among refugee communities, the need for food aid rises to 90%, according to the International Rescue Committee.

“Lebanon never had a productive economic model,” said Albert Leteyf, a partner at one of the country’s leading financial consultancies, Levantine Partners. “Its exports were its people, who sent money to their families. But that was never enough to fill the gap in the trade imbalance.

“The [dollar] peg gave the Lebanese a sense of artificial wealth. It gave them buying power that did not correspond to the wealth of the country.”

A belief has taken hold in Tripoli that the country’s political system has entrenched a permanent underclass “You think this government cares about us?” asked Borhol, waving her ladle. “We have to keep going. There needs to be change, or else what will all the people do, leave the country? Then the corrupt politicians will have nothing to rule.

“When we go to the streets as revolutionaries, we carry stones like Palestinians. That’s all we have. The people are literally starving, and the government is failing them.”

From his residence in the city, the former justice minister Ashraf Rifi said global politics remained a significant factor in the country’s current crisis.

“There is a push me pull me game between the ones who stand with the Americans, and those who stand with the Iranians,” he said. “When the revolution began, people were not talking in sectarian terms, they were just stating what they wanted. Now they are talking about their demands and the politics as one, because you cannot have one without the other.”

Rifi, a staunch foe of the most powerful political bloc in the country, the Iran-backed Hezbollah, said the party’s role in Lebanon had become insurmountable to those demanding a new form of governance.

“To do something about it needs to be an international and regional decision. Only then can we meaningfully start to talk about change,” he said. “There has been a vacuum here for so long now. And when there is a vacant space, polluted matter will take it.”